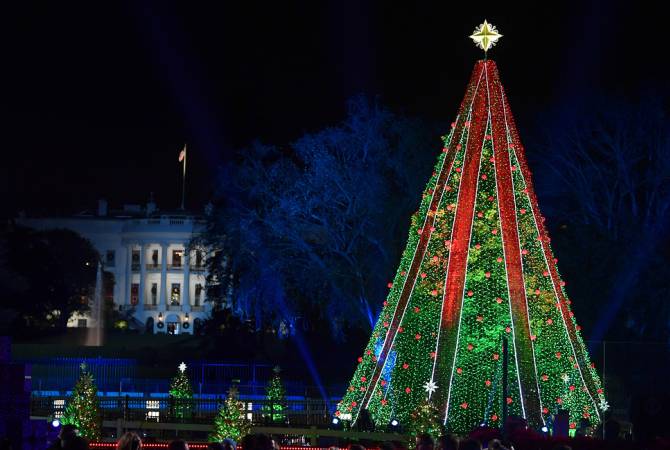 President Trump made a brief appearance on stage, wishing attendees a merry Christmas.

"Merry Christmas, everybody," the Trump told the crowd. "We just have to say it all together, merry, merry Christmas."

Trump began a countdown from 10, at the end of which the first lady hit a button to light the tree.

Trump shared a photo of the tree on Twitter.

"On behalf of @FLOTUS Melania and the entire Trump family, I want to wish you all a very MERRY CHRISTMAS!" Trump wrote. "May this Christmas Season bring peace to your hearts, warmth to your homes, cheer to your spirits and JOY TO THE WORLD!"

The tree was delivered earlier on November 20.

On that day, the tree arrived at the North Portico of the White House by jingle bell-adorned horse and carriage, continuing an annual tradition.

The Trumps, both dressed festively in red, surveyed the tree as a military band played Christmas carols, walking hand-in-hand as they inspected the carriage's cargo.

This year's tree, standing 19-and-a-half-feet tall, hails from Mountain Top Fraser Fir farm in Newland, North Carolina, and will be displayed in the Blue Room.

White House Christmas tree selection is a competitive process overseen by the National Christmas Tree Association, which has provided the official tree since 1966.

The tradition of the White House Christmas tree dates back to 1889, when President Benjamin Harrison placed the first tree in the Yellow Room, decorated with candles and toys for his grandchildren, according to the White House Historical Association. The tree is believed to have made its debut in the Blue Room during the Taft administration in 1912.