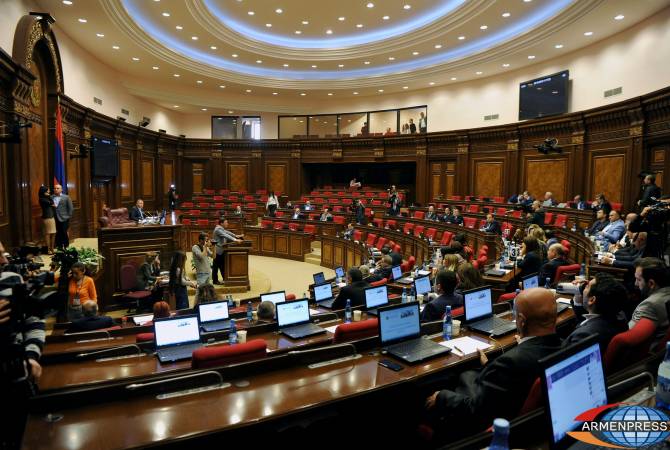 
YEREVAN, NOVEMBER 16, ARMENPRESS. A number of bills were rejected today by parliament, including the bill authored by MP Samvel Farmanyan and MP Mihran Hakobyan on banning bookmaking in Armenia.

Ahead of the vote, Yelk and Tsarukyan factions announced they will not vote. Farmanyan even suggested withdrawing the bill from voting.

The bill of Yelk MP Edmon Marukyan on amending the Criminal Code was also rejected. Under the proposed changes, 1 day of pre-trial detention would’ve been calculated as 1,5 days if found guilty and convicts would serve lesser time in prisons because the sentence calculates the period beginning from the moment of pre-trial detention.

Only one bill was approved – technical amendments to the law on road traffic safety.

The bill on amending the freedom of assembly law was also rejected.

Earlier, Tsarukyan faction Member of Parliament Naira Zohrabyan argued that the bill of HHK lawmakers Samvel Farmanyan and Mihran Hakobyan on banning bookmaking in Armenia will not solve the task it pursues.

Zohrabyan proposed to withdraw the bill from voting.

“The idea at the basis of the initiative is important,” she said. She reminded that they, together with MP Alen Simonyan, had previously presented a similar bill. “I can confidently say that our bill was regulating in a more literate way the problem that is raised. Tsarukyan bloc will not take part in the voting of the bill,” she said.

She said they have reasonable concerns that the authors of the bill don’t realize the chaos that will be caused in the event of adopting it.

Farmanyan presented yesterday the bill on amending the law on gambling in parliament.

He argues that 99,9% of the society in Armenia agree that bookmaking must be banned. He even proposed the ruling party to raise this issue in one of its campaigning rallies.

“The prime minister, on various occasions, has also noted that gambling is harmful not only from the perspective of economic development, but also inflicts irreversible losses to the moral description of our people,” he said.

Farmanyan said he has worked on the bill for more than five years.

“Different governments have brought different arguments on why banning the existence of these bookmakers would be wrong in Armenia. I believe that the parliament can make this important step, for which all of us can sleep calmly, knowing that we are saving people from a potential sinkhole,” he said, adding that bookmaking offices exist in almost all regions of the country.

He added that upon his recommendation the minimum required age for betting was raised from 18 to 21 previously.

The freedom of assembly law concerned Members of Parliament Galust Sahakyan, Mihran Hakobyan and Karine Atchemyan’s legislative initiative suggesting to ban holding assemblies (rallies) in the territories of the Armenian Apostolic Church, if the church hasn’t authorized it.

Co-author of the bill Mihran Hakobyan presented the initiative on amending the law on freedom of assembly to lawmakers yesterday.

He said that assemblies must take place within a safe distance from the President’s Office, the Parliament Seat, government offices, courthouses or correctional facilities not to ‘threaten the normal functioning’ of the abovementioned institutions. “Assemblies must also be banned in the territories belonging or leased by the Armenian Apostolic Church, if the church’s consent is absent. The church has its exclusive role in the preservation of our national identity. The 2011 law on freedom of assembly doesn’t anyhow regulate this issue,” Hakobyan said.

“In case of adopting the bill, the threats aimed at disrupting public order in these territories and threats on forming an atmosphere of intolerance based on religious grounds will be eliminated,” the lawmaker said.

13:12, 05.10.2022
2505 views Armenia’s proposals handed over to Azerbaijan in Brussels include also status, security of Artsakh – Ambassador-at-large