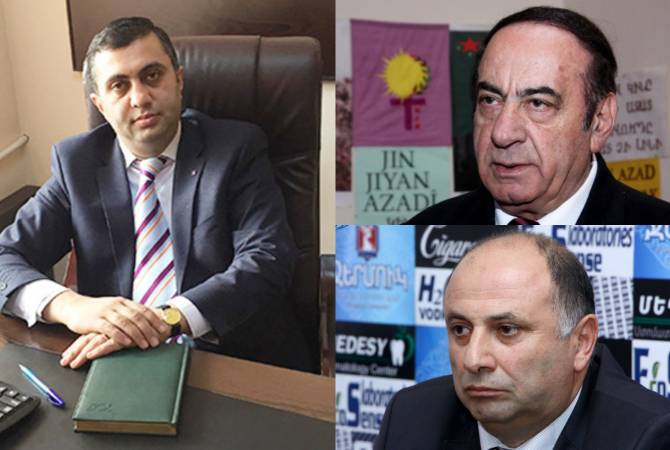 “We will try to nominate our candidacies through any party. We won’t run under opposition lists because national minorities should be with the government. We solve all our community issues with the government. If they accept us, we will be in their lists,” Member of Parliament from the Kurdish community of the Republican [HHK] faction Knyaz Hasanov told ARMENPRESS. He said he will express his final decision after the domestic political developments conclude.

Lawmaker Arsen Mikhaylov, representing the Assyrian community from the Republican faction, says that they will definitely participate in the expected early elections. “We aren’t affiliated to any party, we came to parliament by quota from the national communities. We can’t leave the Assyrian community in Armenia as opposition. Therefore we will be within the governmental force,” he said.

He ruled out running for parliament under the Republican Party list.

MP for the Yazidi community (HHK faction) Rustam Makhmudyan said they have a desire to run in the elections but as long as the incumbent parliament functions he can’t go into details. He said he doesn’t have a clear decision yet on whose list he wants to be included.

ARMENPRESS also contacted the ruling party for the government’s opinion in this regard.

MP Lena Nazaryan from the Civil Contract Party, the leader of the Yelk faction, said naturally their list will include representatives of national minorities.

“It is also an onbligation for factions envisaged by the Electoral Code. Besides an obligation, it is a good opportunity for national minorities to be represented in our list too. We are in contact with community representatives and we are considering cooperating with different candidates,” she said.

She didn’t rule out the participation of incumbent national minority lawmakers in the process, but at the same time she said that they are ready to get acquainted with other representatives.

Incumbent acting Prime Minister Nikol Pashinyan has been formally nominated as a candidate in the upcoming final round of electing a prime minister in parliament.

A candidate requires the backing of 1/3rd of the 105 MPs to be nominated. He is the only candidate.

The election, or rather confirmation hearing, will take place November 1, 12:00.

Prime Minister Nikol Pashinyan tendered a technical resignation on October 16 in order to launch the process of calling early elections.

Under the law, if a prime minister resigns lawmakers must elect a new PM within two weeks. If MPs fail to elect a PM during the first vote, a second round takes place a week later.

Prior to the vote, parliamentary factions must nominate candidates for the election. All factions agreed that they wouldn’t nominate anyone in order to pave way for dissolution. But the Yelk faction nominated incumbent Nikol Pashinyan in a technical maneuver because the Constitution says that a “vote” must take place. Lawmakers are expected to deliberately vote down Pashinyan in order to fail the election and head for eventual dissolution, and early elections.