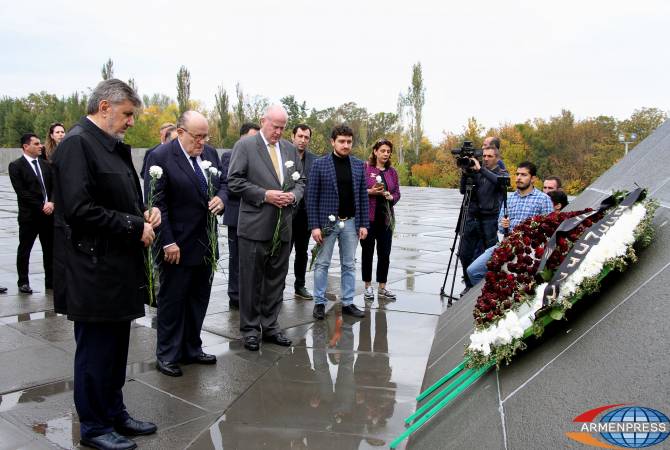 Giuliani laid flowers at the memorial and planted a symbolic tree in the park in honor of the Armenian Genocide victims.

Giuliani is in Armenia for the Eurasia Week International Business Forum.

During the visit to the genocide memorial he also toured the museum and signed the guestbook.

“The Armenian Genocide should not be forgotten because to do so is to make possible similar horrific acts of terror in our era and in the future. The recognition of this Genocide will help prevent such inhumanities in the future. God bless the souls of all who died and may they rest in peace with God,” he wrote in the guestbook.

Speaking to reporters about the possible US recognition of the Armenian Genocide, he said that the genocide is a historical fact, but “I am not here in my capacity as a private lawyer to President Trump”. “I am here as a private citizen. It’s up to the administration to make their own conclusion about that,” Giuliani said.

Speaking about the expansion of the Armenian-American relations, Giuliani said “It’s up to the two governments”.

“I’m here as a private citizen, just to learn some facts in my first time in Armenia, I know the Armenian community in America very well,” he said.

Giuliani has arrived to Armenia at the invitation of Ara Abrahamyan, the UNESCO goodwill ambassador and president of the Union of Armenians of Russia.