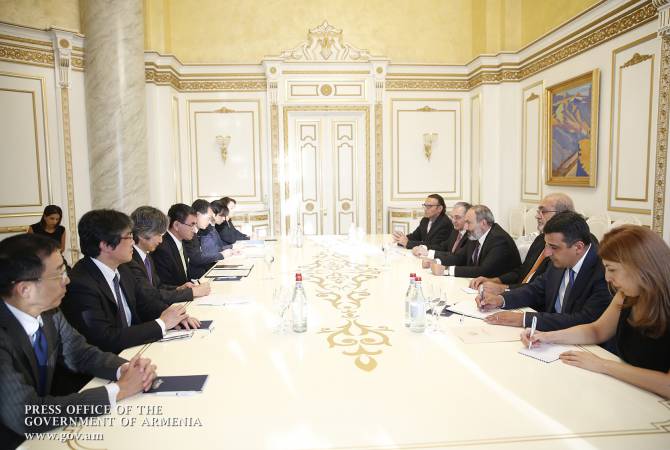 
YEREVAN, SEPTEMBER 3, ARMENPRESS. Prime Minister of Armenia Nikol Pashinyan received on September 3 Foreign Minister of Japan Tarō Kōno who is in Armenia on an official visit.

The PM welcomed the first visit of Japan’s Foreign Minister to Armenia and noted that it takes place in an important period for Armenia in terms of democratic changes. “Last year we marked the 25th anniversary of the establishment of diplomatic relations between Armenia and Japan, which could be described as productive and dynamically developing. At the same time I think we have real chances to raise bilateral cooperation to a new level and particularly to foster economic relations”, PM Pashinyan said.

Japan’s FM shared the opinion of the Armenian PM over the issue that the two countries have a great potential for developing and deepening the partnership in different spheres. “It’s an honor for me to visit Armenia. Today I visited “Tumo” center for creative technologies and I am impressed by the Armenia’s educational model of technologies. “Tumo” is one of the areas where we can collaborate. We are ready to discuss the prospects for economic cooperation”, he said.

PM Pashinyan referred to the newly established political and economic situation in Armenia and the reforms underway, particularly fight against corruption and improvement of business and investment environment. The Foreign Minister of Japan saluted the democratic changes in Armenia and expressed readiness to support the Armenian Government in that process.

Speaking about the development of economic relations the interlocutors highlighted the signing and ratification of the agreement on “Liberalization, Encouragement and Protection of Investments between the Government of Armenia and the Government of Japan”.

The Head of the Executive assessed promising the development of partnership in high technologies, tourism, infrastructures and innovations.

The sides highlighted the necessity of holding culture days of both countries in Armenia and Japan, as well as deepening of inter-parliamentary relations. The interlocutors reached an agreement to set a joint agenda and to actively work to bring it to life.

Nikol Pashinyan also highlighted the deepening of humanitarian ties and the privileged visa regime for the citizens of Japan visiting Armenia, in the sidelines of which they can visit Armenia without entry visa.

Translated and edited by Tigran Sirekanyan