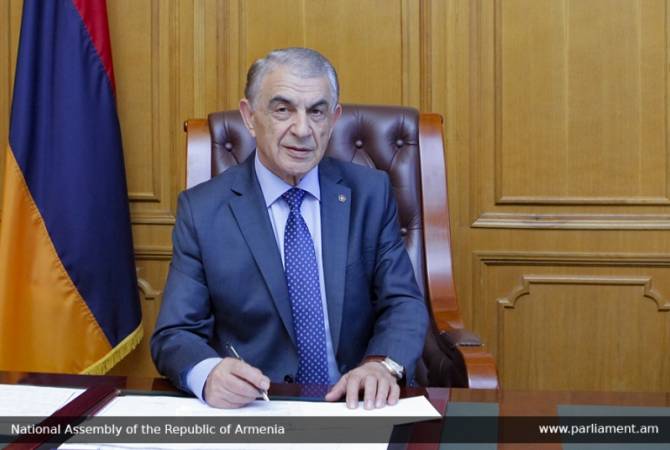 
YEREVAN, AUGUST 23, ARMENPRESS. Speaker of the Parliament Ara Babloyan addressed a congratulatory message on the 28th anniversary of the Declaration of Independence of Armenia, the Parliament told Armenpress.

The message runs as follows:

“Dear compatriots, today we celebrate the 28th anniversary of entering to the restoration path of the Armenian independent statehood.

On August 23, 1990, the Supreme Council of the 12th convocation of the Soviet Armenia ratified a fundamental document which was titled “Declaration about the Independence of Armenia”.

Its twelve points seemed were just a small and brief Constitution of the yet not created Armenian independent and democratic statehood. And we need to preserve its all traditions since by this way we should protect everything for which we fought in 1998 aimed at declaring them priority values.

28 years later it’s even difficult to say whether Armenia’s Independence Declaration was the childhood of our political mind or the reflection of maturity of a legal mind.

The August 23 Declaration was at the same time the most important milestone and starting point to the path leading to September 21, 1991.

It was a Declaration, but none of its twelve points were of a declarative nature, it became a reality thanks to our fight and sacrifices.

August 23 is mentioned in our calendar with golden letters and has became a symbol of will and determination to make the dream of several generations of Armenians a reality.

Decades will follow each other, numerous laws will be re-edited, amendments will be made in the Constitution of the Republic of Armenia. However, both we and each upcoming generation have to preserve the democratic and national values enshrined in the Independence Declaration, the freedom of speech, press and conscience, the equality of legislative, executive and judicial powers which were declared as fundamental values on August 23, 1990. Good luck to us on this path”.