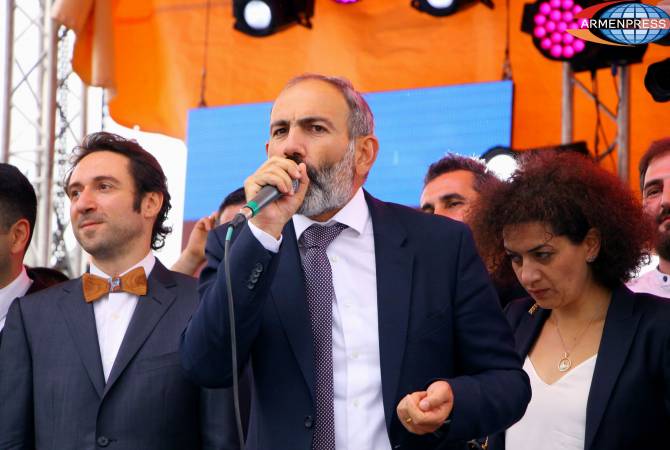 
YEREVAN, AUGUST 17, ARMENPRESS. Prime Minister of Armenia Nikol Pashinyan is ready to negotiate for Nagorno Karabakh conflict settlement on behalf of Armenia, but thinks that the authorities of Artsakh should negotiate on behalf of the Republic of Artsakh, ARMENPRESS reports PM Pashinyan announced about this during the rally dedicated to the first 100 days of his tenure at the Republican Square.

The PM said that Armenia is ready to give a powerful counter blow to Azerbaijan, but he prefers a peaceful settlement.

Pashinyan emphasized that he will not sign any document over Nagorno Karabakh without consulting with the people.

“If in the negotiation process there is an option that I will think is a good one and will favor it, I will never sign any document without your consent. I will present it to you in detail and you will decide if we will accept that option of settlement or no”, Pashinyan said.

PM Pashinyan first announced about necessity of Artsakh's authorities to participate in the negotiations on May 9, the day after being elected Armenia's PM. This was welcomed by Artsakh's leadership, but was negatively accepted by the Azerbaijani side. Russian FM Lavrov announced that if the sides reach an agreement on the issue, they will respect that decision.

19:30, 01.14.2022
Viewed 1675 times Russian MFA issues statement on the results of the meeting between the special representatives of Armenia, Turkey

10:38, 01.15.2022
Viewed 1551 times CCAF calls on French government to demand apology from Azeri authorities or else recall ambassador over Aliyev’s threats