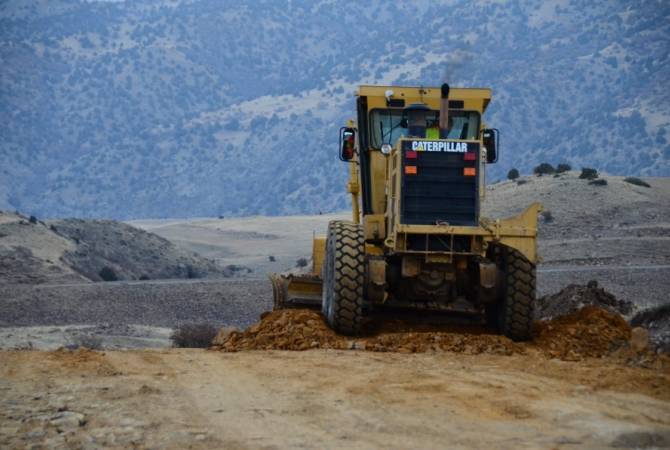 Recently the Armenian Nature Preservation Front, a nature protection organization, addressed an open letter to Lydian International’s major shareholders citing the concerns of independent experts over the Amulsar gold mine. According to the concerns, the Lydian International mine project threatens the environment, a high risk of negative impacts exists, and drinking water resources are jeopardized.

The London-based Business and Human Rights Resource Center published the concerns and invited Lydian shareholders to respond to the issue.

Major shareholders of Lydian International include two American funds, several European companies, as well as the European Bank For Reconstruction and Development (EBRD). RBC Asset Management, European Bank for Reconstruction & Development (EBRD) and Resource Capital Funds responded to the offer. The issue concerns today’s largest international investment in Armenia, and this time a wholly new quality of dialogue is presented.

EBRD responded: “We would like to emphasize that the Amulsar Gold Mine Project is being developed in line with the policies of its shareholders through which the shareholders, including the EBRD, commit to integrating environmental, social and governance matters into their investment processes and ownership activities in line with international best practice. EBRD has carefully assessed any potential environmental and social impacts of this project, as is the case for any mining operation, rigorously assessing expected benefits and potential risks, and ensuring that appropriate mitigation measures are put in place where necessary.

The application of standards and performance requirements is monitored regularly by EBRD staff and independent specialists, which have confirmed that all aspects of the ESP are met in the Amulsar Gold Mine Project.

An Independent Panel of Experts (IPoE), which is comprised of distinguished professionals from across the world, including Armenia, has been convened to provide oversight to the project, independent of the Company and the shareholders.

With specific regard to the reports produced by Mr Bronozian and associated specialists, in particular the concerns relating to the potential for Acid Rock Drainage (ARD), Lydian International has presented a technical paper responding to the claims point by point.

Overall, EBRD is confident that the Amulsar Gold Mine Project’s design, management systems and stakeholder engagement activities align with industry best practice and Lydian International has committed to continue to comply with international standards throughout construction, operation and closure of the mine.

The EBRD also reminds the fact that Lydian International had offered the experts who raised concerns to meet and discuss the results of the research, but the offer was refused by Bronozian and his colleagues.

Lydian International also responded to the accusations and said that they have accepted the Armenian government’s invitation to meet and hold discussions with the authors of the reports criticizing the Amulsar project, but the latter have refused to participate in the discussion.

“The Amulsar project has been subject to an extraordinary amount of compliance oversight and review to ensure it meets or exceeds best international practice. Five external audits were carried out in 2017 alone and found the project to be compliant,” Lydian International said in the response.

One of the largest shareholders of Lydian International, Resource Capital Funds, said in its response that the RCF is a signatory to the United Nations-supported Principles for Responsible Investment (PRI) since 2013, and it understands the inherent risks associated with mining.

“[RCF] therefore proactively engages its portfolio companies regularly to ensure that strategies are in place to mitigate ESG-related risks and recognize opportunities. RCF monitors Amulsar’s ESG activities on a regular frequency and actively engages with its environmental and social team. RCF believes that the Project design and management systems align with industry best practice and that Lydian continuously strives to create a transparent process for information sharing with its stakeholders,” Resource Capital Funds said.

Some of the shareholders of Lydian didn’t respond to the letter, but from the abovementioned responses it is obvious that the raised concerns weren’t unexpected for them, they were aware of its content and they have answers as to why they are funding the Amulsar project and what grounds they have to be certain that it will be a project realized with international nature preservation standards.