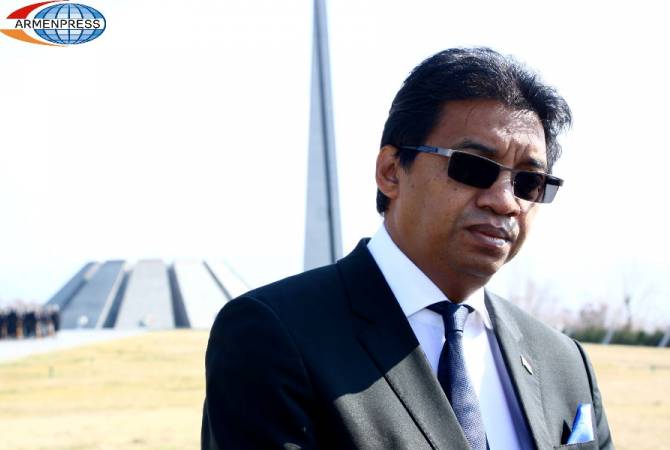 
YEREVAN, FEBRUARY 23, ARMENPRESS. As people full of respect towards humanity we have a constant obligation to the memory of the innocent victims who just wanted to live, Henry Rabary-Njaka - minister of foreign affairs of Madagascar, wrote in the Honorary Guest Book of the Armenian Genocide Museum-Institute, reports Armenpress.

The minister arrived in Armenia over the organization issues of the visit of the President of Madagascar to the upcoming Francophonie summit which will be held in Yerevan in autumn.

“As people, who respect humanity, we also have a constant memory obligation to the memory of the innocent victims, to the children, adolescents, youth, women and men who were just asking for allowing them to live. The whole humanity should learn lessons from these terrible events so that the history will no longer be repeated in this direction. “Never Again” should not be just a slogan, we should live like that. We pay tribute to the memory of all Armenian victims”, Henry Rabary-Njaka said.

The delegation members of Madagascar’s foreign ministry laid flowers at the Eternal Flame in the Tsitsernakaberd Memorial, then toured the Museum-Institute and got acquainted with the history of the Armenian Genocide committed by the Ottoman Empire in the early 20th century.

The foreign minister told reporters that before visiting Armenia he got acquainted with these events and said with regret that today as well similar terrible events repeat throughout the world.

In response to the question of ARMENPRESS according to which “Armenia assumed the leader’s role in prevention of genocides, how can Madagascar assist our country in this regard”, the foreign minister said: “The current leadership of Madagascar shows a great respect to human rights, humanity, of course, the fact that now we are in our friendly country already means that we share the same values with Armenia”.