We are all appreciated in our homeland: Helen Azaryan’s advice to Syrian-Armenian women | ARMENPRESS Armenian News Agency

We are all appreciated in our homeland: Helen Azaryan’s advice to Syrian-Armenian women 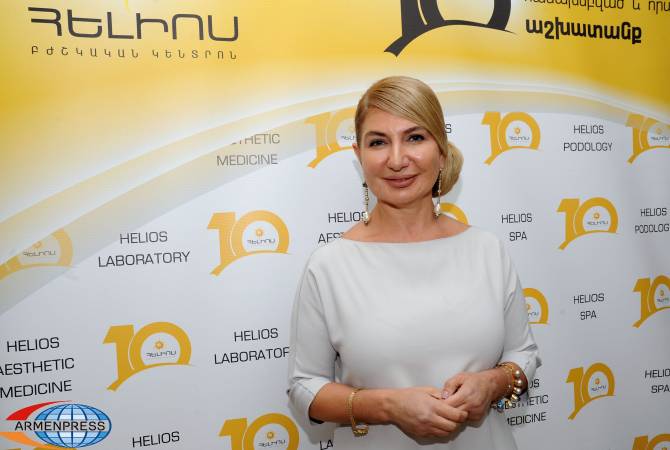 
YEREVAN, OCTOBER 11, ARMENPRESS. Syrian-Armenian women who settled in Armenia shouldn’t look for other countries. They can feel support and achieve success in their homeland. This is the urge of Armenian-Kuwaiti businesswoman Helen Azaryan, who reached Kuwait’s Clinic from Armenia’s polytechnic university, and founded her own medical center and achieved success. She shared her success story during a meeting titled “Close Conversation of Women”, where she exchanged her experience with Syrian-Armenian women. Future doctor of the polytechnic university

I studied in the national polytechnic university of Armenia, however I always wanted to be engaged in medicine. After graduating, the most affordable for me in this branch was Haybusak university. I enrolled there, graduated with a profession of cosmetologist-doctor. I married in 1993, and me and my husband left for Kuwait.

The Armenian who kept Kuwaitis in line

In Kuwait, where I was working, I was given an office in an underground floor, while the most famous dermatologist of Kuwait was working on the 3rd floor of the same building. Once he approached the building’s supervisor and said that Kuwaitis don’t like to wait in line. And he started asking who it was that worked downstairs for whom so many people stood in line. The supervisor said: It’s an Armenian who came from Armenia.

The woman with the “Golden” fingers

The flow of visitors was growing. Once a reporter approached me and asked an interview. However, since I was very busy, I asked that he talks with the visitors who are waiting for me. He met a woman who I treated from a serious condition. She said the following about me: “a woman with “golden” fingers. This term became popular in Kuwait.

When I worked in Kuwait, I understood that I need to train as a dermatologist-venerologist. Upon returning to homeland, I continues my studies. But it was in my nature to be engaged in several jobs. During these years I came up with the idea to create the Helios medical center, in which my husband helped me a lot. Helios is the Latin version of Helen.

Helios is known and trusted in Kuwait as a center of Armenians. It was already the 23rd year that I created it in Kuwait, when I founded the international standard center also in Yerevan.

Armenian women of the East

After establishing the center I clearly understood what I want, it gave me confidence. I want that all women of my circle to be that way. Syrian-Armenian women shouldn’t search in foreign countries what they can truly find in Armenia.

We are all appreciated in our homeland.