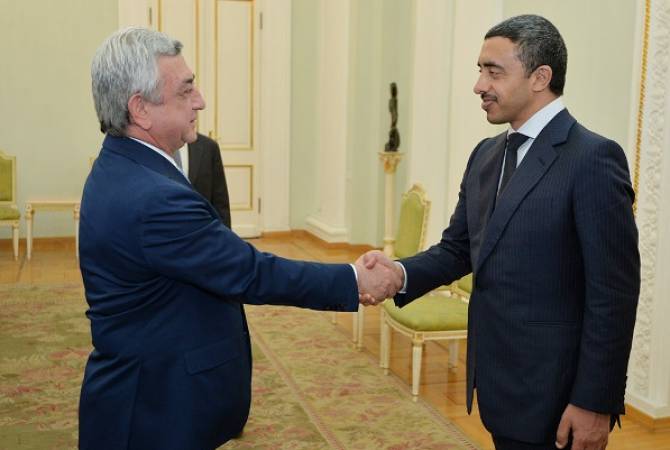 Welcoming the guest, President Sargsyan said Armenia highly appreciates the dynamically developing relations with the UAE and considers the visit of the Minister as an important step to boost the relations. Serzh Sargsyan said Armenia highly appreciates the mutual partnership between the two friendly countries and noted with satisfaction that the bilateral inter-state ties are developing and strengthening day by day. He warmly remembered his visit to the UAE in spring of 2017 which gave new qualitative impetus to the bilateral relations. The President expressed hope the UAE Minister’s visit to Armenia will enrich the Armenian-UAE cooperation agenda with new content.

In his turn, Minister Sheikh Abdullah bin Zayed bin Sultan Al Nahyan thanked the President for the warm wishes and conveyed to him the warm greetings and wishes of his country’s leadership. The UAE Minister expressed confidence that the Armenia-UAE relations can further develop since there is a political will of the leadership of the two countries and firm base to boost those relations.

The UAE Minister thanked President Sargsyan for elimination of visa requirements for the UAE citizens which, according to him, was a major and important step for the two countries.

Minister Sheikh Abdullah bin Zayed bin Sultan Al Nahyan said both sides need to carry out significant works to fully utilize the existing potential in tourism, energy, agriculture and other spheres and he is ready to make joint efforts with his Armenia partner on that path.

At the meeting regional affairs and threats, as well as the peaceful settlement process of the Nagorno Karabakh conflict were also touched upon.