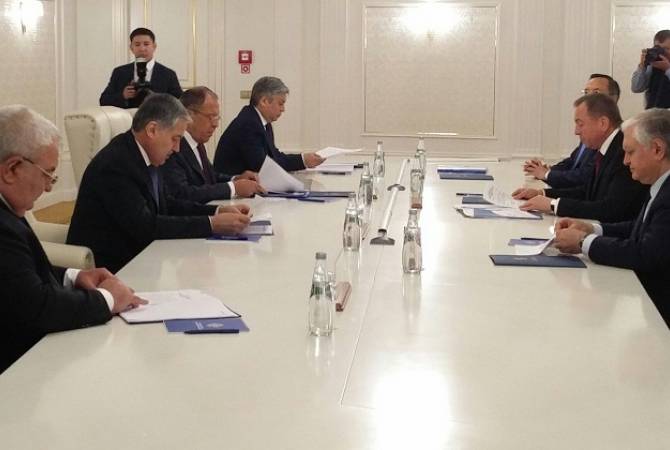 
YEREVAN, JULY 17, ARMENPRESS. Foreign Minister of Armenia Edward Nalbandian on July 17 participated in the session of the Council of Foreign Ministers of the Collective Security Treaty Organization (CSTO) in Minsk, press service of the Ministry told Armenpress.

CSTO Secretary General Yuri Khachaturov reported on the ongoing activity of the organization at the session.

During the narrow format meeting the ministers discussed the process of implementation of decisions reached at the CSTO Yerevan summit in 2016, the priorities of Belarus’ chairmanship in the CSTO, exchanged views on global and regional security issues, the situation in Central Asia, South Korea, as well as the ongoing developments in the Middle East, the efforts aimed at establishing stability in Afghanistan.

At the meeting issues relating to combining foreign policies of the CSTO member states, the development of military and military-technical cooperation and fight against terrorism and illicit drug trafficking were also touched upon.

Armenian Foreign Minister Edward Nalbandian delivered remarks over these matters at the session. He drew the attention of the CSTO FMs on the efforts of Armenia and the OSCE Minsk Group Co-Chairing countries aimed at moving forward the settlement process of the Karabakh conflict, as well as Baku’s actions aimed at preventing them, such as hindering the implementation of agreements reached at the Vienna and St. Petersburg summits, its military provocations and the escalation of the situation as a result of these actions.

FM Nalbandian presented to the colleagues Armenia’s stance on the developments in Syria, the assistance programs for refugees in Armenia, as well as details on providing Armenian humanitarian aid to the Syrian people. In this context, Nalbandian thanked the Russian Federation for the assistance provided for delivering the Armenian aid to Syria.

The session participants also exchanged views on the cooperation between the CSTO and other international and regional structures.