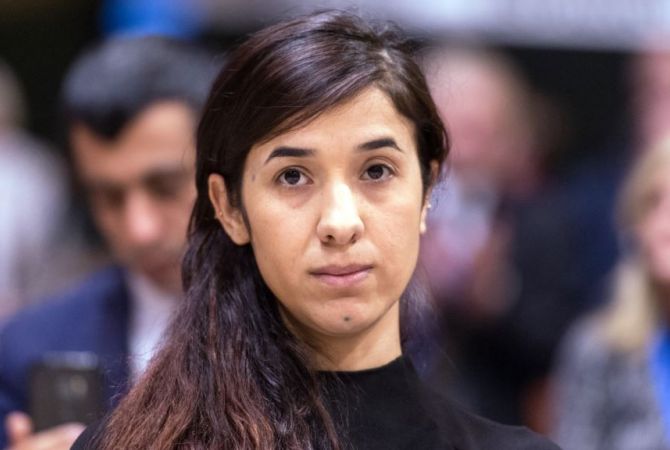 
YEREVAN, APRIL 24, ARMENPRESS. Nadia Murad - Yazidi human rights activist, Nobel Peace Prize nominee and since September 2016 the first Goodwill Ambassador for the Dignity of Survivors of Human Trafficking of the United Nations, gave an exclusive comment to Armenpress addressing her message to the whole world to recognize the Armenian Genocide perpetrated by the Ottoman Empire.

Armenpress presents the full text of her statement:

“On behalf of the Yazidi community, I wish to extend our compassion and understanding to our Armenian sisters and brothers, who are today commemorating the 102nd anniversary of the Armenian Genocide. Just over a century ago, the Ottoman Turkish authorities perpetrated a genocide against Armenians, Assyrians, Greeks, and Yazidis. Millions were killed or perished on death marches without food or water, just as our Yazidi people were murdered on Mt Sinjar in 2014 at the hands of ISIS. Armenian women and children were abducted, forcibly converted, raped, trafficked and forced to marry their perpetrators, tortures that thousands of our Yazidi women and children are enduring now.

Yazidis and Armenians have been neighbours for centuries. The Armenian Genocide, which began on 24 April 1915, displaced so many. Yazidis numbered more than half a million people in Turkey a century ago. Now there are only a few hundred. In contrast, Armenia is home to tens of thousands of Yazidis and grants them freedom to practise their religion and culture, and to participate fully in political and social life.

Turkey still today denies the genocide of the Armenians, a denial that is entrenched in the Turkish establishment and compounds the intergenerational trauma for Armenians. As Yazidis, we call on the global community to recognize the heinous crimes committed against the Armenians and other minorities by the Ottoman Turks. And let this also be a reminder to the world of the importance of recognition and perpetrator accountability.

I hope that in 100 years, Yazidis are not still asking for acknowledgement of the crimes they endured under ISIS, but rather, that the history books will tell of perpetrators being prosecuted and a Yazidi community that is surviving and flourishing, like the Armenians are today”.

Murad was born in the village of Kocho in Sinjar, Iraq. At the age of 19, Murad was a student living in the village of Kocho in Sinjar, northern Iraq when Islamic State fighters rounded up the Yazidi community in the village killing 600 people – including six of Nadia's brothers and stepbrothers – and taking the younger women into slavery. That year Murad was one of more than 6,700 Yazidi women taken prisoner by Islamic State in Iraq. She was held as a slave in the city of Mosul, beaten, burned with cigarettes, and raped when trying to escape. Nadia was able to escape after her captor left the house unlocked.