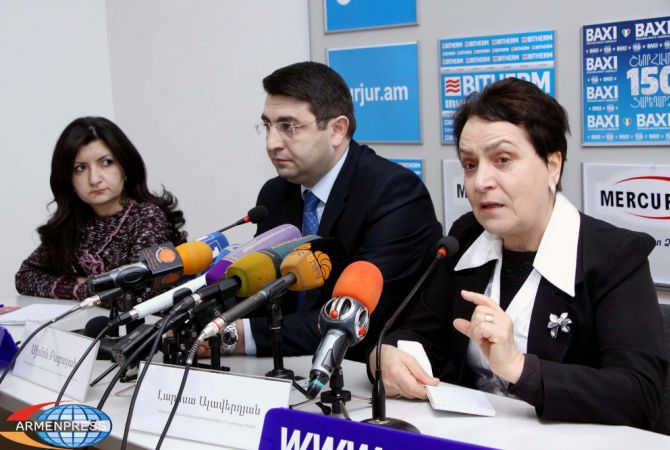 
YEREVAN, FEBRUARY 9, ARMENPRESS. The extradition of Alexander Lapshin from Belarus to Azerbaijan is a challenge for the international community itself, Larisa Alaverdyan, executive director of the “Against Legal Arbitrariness” NGO told a press conference in ARMENPRESS.

“A rough violation and neglect towards long adopted and used international norms took place in the case of Lapshin’s extradition. It is a challenge, directed not as much at Armenians, but at the international community itself, at the societies of civilized countries. There is an informal agreement regarding the extradition case, a severe violation of international rights. We must understand, Belarus once again confirmed its being out of the civilization field”, Alaverdyan said.

She said Armenia’s state political bodies should use all platforms to reach specific terms regarding Azerbaijan, resolutions, why not sanctions.

“We can’t tolerate the cases of Ramil Safarov [Azerbaijani soldier who killed an Armenian servicemen in Budapest while the latter was asleep], Kyaram Sloyan [ NKR soldier who was posthumously decapitated by Azerbaijani soldiers during the April War] and other cases. We must clearly convey the idea that Azerbaijan is acting like an outlawed terrorist group. Believe me, Courts definitely take into consideration the atmosphere which has been formed in the media field by bloggers and news agencies. The pressure of the international community must take place. Here, all our structures have a lot to do”, Alaverdyan said

Speaking about the actions of Belarus, Alaverdyan said we shouldn’t consider that country to be an ally. “Belarus never assumes responsibility for anything. It’s become a trend to oppose Russia, at the same time blackmailing, Belarus is trying to get some dividends. By the way, there aren’t any political figures who wouldn’t sell, the price is simply different. If in the case of Hungary [Ramil Safarov extradition] the price was 3 billion USD, then now it’s about 5 billion USD. It’s a sickening situation”, she said.

Alexander Lapshin, the Russian-Israeli blogger who was extradited from Belarus to Azerbaijan on February 7, has been placed in the isolation cell in Azerbaijan’s state security service, Ria Novosti reported.

Lapshin was flown to Baku from Minsk on a special flight, escorted by state security agents. A group of reporters were waiting for Lapshin in Baku’s airport, but Lapshin didn’t give any comment to them.

A news correspondent reported from the airport that Lapshin is in a serious mental condition and he didn’t respond to the questions of journalists.

The Belarus Supreme Court denied Lapshin’s appeal on the extradition verdict issued by the General Prosecutor of Belarus.

Lapshin faces up to 5 years imprisonment in Azerbaijan, under charges of “public calls against the state”, and “unauthorized crossing of borders”.

Belarus police arrested Alexander Lapshin on December 15, 2016 in Minsk. Lapshin, a Russian and Israeli citizen, resides in Moscow and writes for the famous Russian Travel Blog. He is wanted by Azerbaijan for visiting Nagorno Karabakh in 2011, 2012 and 2016, and criticizing Azerbaijan’s policy in his blog.

Baku demanded the extradition of Lapshin from Belarus.