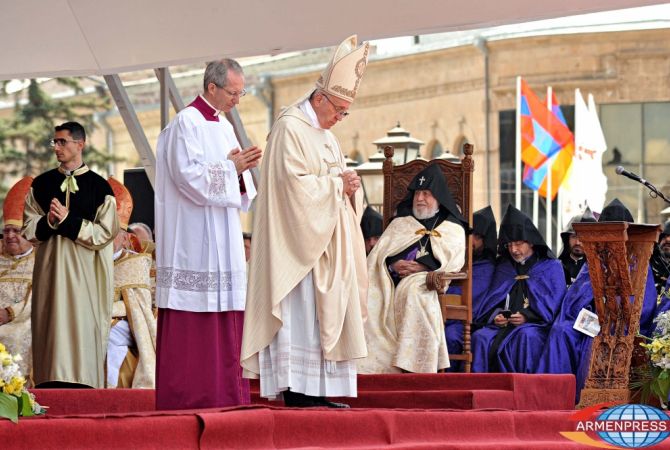 
YEREVAN, JUNE 25, ARMENPRESS. The Holy Mass delivered by Pope Francis is beginning in Gyumri’s Vardanants Square.  His Holiness Catholicos of All Armenians Garegin II, Catholicos-Patriarch Father Grigor Bishop Kaproyan of the Armenian Catholic Church and leader of the Armenian Catholics Rafayel Archbishop Minasyan will also take part in the mass.

Afterwards Pope Francis will visit the Our Lady of Armenia Convent, the Cathedral of the Holy Mother of God and Holy Martyrs Catholic Church.

On June 24 Pope Francis arrived in Armenia on a three day visit. The Pope was welcomed in the Zvartnots airport by President Serzh Sargsyan, First Lady Mrs. Rita Sargsyan and His Holiness Catholicos of All Armenians Garegin II. A welcoming ceremony was held in the Mother See of Holy Etchmiatsin.

During the day the Pope will return to Yerevan, where the most important and most open event for the society during his visit will take place in the Republic Square.

A peace prayer will be delivered, which will be preceded and followed by a joint festive concert of the Armenian Philharmonic Orchestra and the State Choir – dedicated to Pope Francis’ visit to Armenia.

In the morning of June 26, a mass will be held in Mother See of Holy Etchmiatsin, which will be delivered by His Holiness Catholicos Garegin II with Pope Francis.

Several events will be held in the Mother See of Holy Etchmiatsin, after which Pope Francis and Catholicos Garegin II will visit one of the most important shrines of the Armenian people and the Armenian Apostolic Church – Khor Virap- where they will pray together and release doves towards Ararat. Afterwards the Pope will head to the airport to return to Rome.