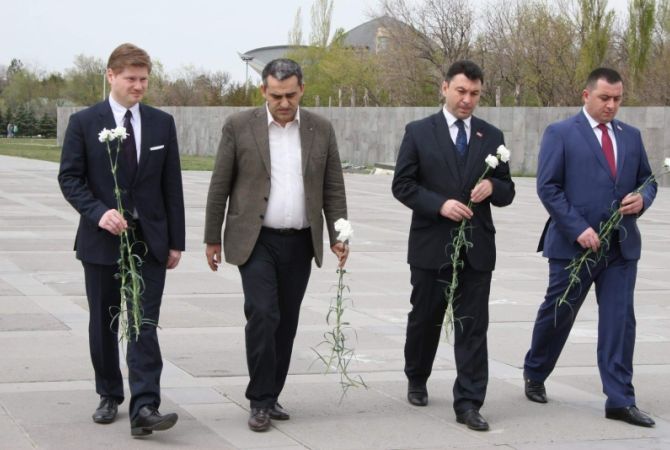 As “Armenpress” was informed by the Department of Public Relations and Media of the National Assembly of Armenia, the Deputy Speaker expressed his gratitude to Sergejs Potapkins for supporting the opening of the exhibition dedicated to the Armenian Genocide Centennial in Riga, the capital of Latvia.

Touching upon the situation in the Karabakh-Azerbaijani line of contact in recent days Eduard Sharmazanov noted that the leadership of Azerbaijan undertakes actions contradicting the international principles, taking terrorist steps towards Nagorno Karabakh. And Turkey’s authorities openly speak about supporting and defending Azerbaijan.

Eduard Sharmazanov considered unacceptable putting the sign of equality between the Republic of Armenia and Azerbaijan by the international community, as our state is for the solution of the conflict exclusively through peaceful means. In the NA Deputy Speaker’s word, the people of Nagorno Karabakh deserve to execute their right of self-determination. He expressed hope that eventually the reason will win, and the international community will understand that the human life costs more than the weapon and the money. The NA Deputy Speaker has noted that in times of war the law falls silent, and the historical justice will be restored.

In his word Sergejs Potapkins has noted that during escalation of the conflict he made a decision to visit Armenia and get acquainted with the situation. He has stated that the international community should see the real picture, but not get familiarized with it from the press. In the Latvian MP’s word, it is inadmissible, when the peaceful population suffers from the military aggression. With that respect the re-establishment of peace is a prior problem, the escalations of the conflict don’t promote the establishment and maintenance of peace.

Let us remind that in the morning being in Yerablur Pantheon Sergejs Potapkins noted that he was impressed and shared the grave grief of the close relatives of the militaries who were perished in recent days.

On the same day the Member of Parliament of Latvia, the Head of Latvia-Armenia Friendship Group Sergejs Potapkins together with the NA Deputy Speaker Eduard Sharmazanov visited Tsitsernakaberd Memorial Complex and paid tribute to the memory of the Armenian Genocide victims. The Heads of the Parliamentary Friendship Groups of the two countries laid flowers at the monument eternalizing the holy martyrs’ memory.