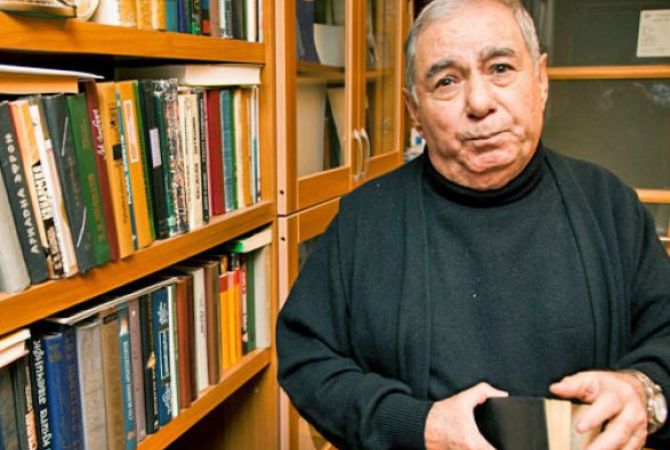 
YEREVAN, MARCH 30, ARMENPRESS. Azerbaijani writer Akram Aylisli was not allowed to go abroad.  He was detained by the transport department of the airport police at Heydar Aliyev Airport. “Armenpress” reports Azerbaijani “Turan” agency informs about this.

Akram Aylisli was to leave for Venice with his elder son Ilias, to participate in international literary festival Incroci Di Civilita from March 30 to April 1 but he was not allowed to abandon the country. The writer’s wife, Galina Aylisli informed the news agency about this.

The renowned writer aged 78 became the target of the authorities in 2013 after publishing the trilogy “Big traffic jam” which exposes the Soviet and current political morals of the Azerbaijani authorities.

Akram Aylisli was a People's Writer (1998) of Azerbaijan and Honored artist. In the novel “Stone Dreams” Aylisli presents in detail the Armenian massacres in Sumgait and Baku and Azerbaijani violence in 1988-90. The novel was published in Russia in 2012 during “Friendship of Nations” event.

Two months after publishing the book the Azerbaijani leadership incited mass hysteria against Aylisli. Pro-governmental youth burnt his photo with a cross on it in front of his house and cried slogans “enemy”, “traitor”.  Members of the Azerbaijani parliament (Majlis) demanded to burn all his books, deprive him of citizenship and expel from Azerbaijan. Ilham ALiyev signed a decree to deprive him of title “People’s Writer”, Presidential pension (nearly 1000 Euro) and cottage. His wife and son were dismissed from their jobs. The leader of pro-governmental “Modern Musavat” party ordered its youth wing to cut his ear for 10 thousand manats.

U.S. Secretary of State, OSCE office in Baku and the EU condemned the oppression of Akram Aylisli and called on the authorities to implement measures ensuring his safety.

The real cause of targeting the writer was that he hinted in his novel that the Armenian massacres in Sumgait were incited by Heydar Aliyev aiming to take power based on those incidents.

Akram Aylisli’s “Stone Dreams” novel was the winner in the nomination “Year's Foreign Bestseller” of 2013 in the sidelines of the special project of “Armenpress” news agency.

Earlier, in an interview with media representatives, Akram Aylisli had told that the novel is based on real stories of witnesses of the Armenian massacres.