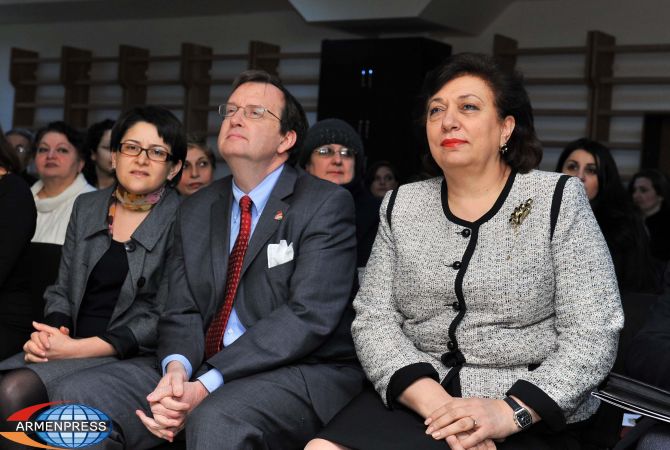 
YEREVAN, FEBRUARY 2, ARMENPRESS. US welcomes Armenia's commitment to adopting Syrian refugees. Ambassador Extraordinary and Plenipotentiary of the United States of America (US) to the Republic of Armenia Richard Mills considers it important that Armenia is the 3rd among European countries on adopting largest number of Syrian refugees.

During the opening ceremony of “Arevik” Center of children and adults with disabilities (mental and physical) the ambassador mentioned that it is gladsome that Armenia welcomed Syrian refugees with open arms. “It is a big honor for me to be here. As the UN refugee commissioners show, the number of displaced people was doubled. The doubling is due to the tragic events taking place in Syria. There were also lighter moments, one of which is Armenia’s adoption of Syrian refugees with open arms,” Richard Mills mentioned, “Armenpress” reports. According to US ambassador, the Syrians were warmly received in Armenia due to Armenian Minister of Diaspora Hranush Hakobyan and her leaded Ministry. Last year, the US government has allocated 6 billion worldwide in assistance to refugees. We supported also the mentioned project,” the ambassador emphasized.

The opening ceremony of “Arevik” Center of children and adults with disabilities (mental and physical) was held on February 2. Armenian Minister of Diaspora Hranush Hakobyan also attended the project.

Refugees from Syria's civil war have flooded into Europe this year, moving mainly towards Germany, Sweden and Armenia. The Economist formed this list. The top three European countries are followed by the Netherlands, Bulgaria, Denmark, Switzerland, Great Britain, Greece and France. The bulk of the refugees are in Turkey – 1 million 558 thousand, Lebanon - 1 million 147 thousand and Jordan – 623 thousand and Iraq - 234 thousand.