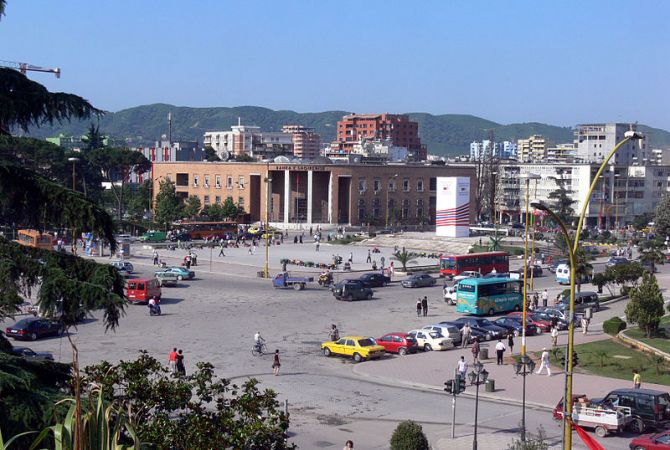 The Honorary Consul of the Republic of Armenia Varuzhan Piranjani was presented in Tirana during a special ceremony with the participation of representatives from Albanian Ministry of Foreign Affairs, other ministries, honorary consuls of some countries, representatives of media and business, Armenian community in Albania.
The opening of honorary consulate will help restructure cooperation between the two countries in the area of joint economic development, trade and tourist exchanges and implementation of important projects.
In his speech the Honorary Consul Varuzhan Piranjani stressed the need to deepen inter-state cooperation between the two countries while highlighting the excellent relations. According to him, tourism is an area which should be developed by both countries.
Two countries which have almost the same geographical spread and population, whose languages come from the family of Indo-European languages but unique in their kind, are subject of important historic and linguistic studies.
“Armenia is considered as the first country in the world to embrace Christianity in the 3rd century and among the first countries with a unique alphabet since the fourth century.
Only these two historic clues suffice to understand the role and contribution of Armenia and Armenians.
It is the first time in history that Armenia has an honorary consul in Albania, therefore I feel honored but also the responsibility for the task I have been assigned.
Having an Armenian father and Albanian mother will make me more responsibly and passionately involved in this duty”, Piranjani said.


Appointment of an honorary consul is a big step forward in establishment of this cooperation. Mr. Piranjani expressed his confidence that this cooperation will come to fruition. The first steps taken so far include the publication of dictionaries and books, production of documentaries on Armenian community in Albania, meetings involving the Armenian community and representatives of Armenia, friendly soccer matches, participation in athletics and weightlifting events, etc.
Pirnajani added that Armenia has recently seen important changes in all walks of life, such as economy, culture, modernization of life and youth as well as more openness to the world, upgraded infrastructure and increase in the number of tourists.
In Piranjani’s opinion, Armenia, with mountainous terrain, countless historic sites and museums which bear testimony to an ancient and rich culture and on the other, Albania with mild weather and enchanting coastline, have a lot what to offer to the citizens of both countries.
Organization of different events, including artistic exhibitions, friendly matches, shows, etc will be great opportunities to promote the cultural treasury of both countries. Presentation of opportunities and provision of incentives for investments in Armenia and Albania is another field which will be promoted through the chambers of commerce of both countries as well as through participation in fairs in Armenia and Albania, as in the case of agri- food industry. The recent match between the national soccer teams was another opportunity to get to know Armenia and Albania on a mutual basis.
Armenia’s honorary consul in Albania stressed among others that Armenian Diaspora is another important factor for Armenia given that around 8 mln Armenians are part of the Diaspora.
Apart from their significant contribution to the country’s economy, they have become the best ambassadors of Armenia and Armenians overseas through prominent people such as artists, businessmen, politicians, sportsmen and sportswomen such as great Charles Aznavour. Armenian community in Albania has been and remains a small-sized community but too solid.
There are roughly 30-35 families of Armenian descent who have preserved a good part of traditions and in some cases even the Armenian language. This small community has had the chance to live among the Albanians who have been very hospitable from their arrival in Albania to this day.

“They found in Albania their second home and were easily integrated in the Albanian society for which they will be always grateful to the Albanians.”
Almost all members of this community have managed to get a university education and made a name for themselves in professions as diverse as university teachers, engineers, doctors, artists, economists, etc and above all are hard-working and decent people, Armenian consul said.


“Piranjani will spare no effort to boost and encourage the relations Armenia- Albania in a constructive fashion”, said the ambassador of Armenia to Albania, Gagik Ghalatchian (resident in Greece).
He congratulated the new honorary consul of Armenia to Albania,
“On behalf of the Embassy of the Republic of Armenia and on my personal name, I wish to congratulate you and the Armenian community in Albania on the opening of the Honorary Consulate of the Republic of Armenia in Tirana,” the message reads.
Armenia attaches high importance to further development of friendly relations existing between the two countries. “It is our desire to deepen bilateral cooperation with Albania in all areas of mutual interest and the opening of the Honorary Consulate is a practical and fundamental step in this direction.
I am fully confident that the Honorary Consulate will make a significant contribution to development of trade, economic and scientific ties between the two countries” mentioned Armenian ambassador Ghalatchian.
He went on to voice his conviction that Piranjani will spare no effort to encourage the relations between Armenia and Albania in the interest of both countries and peoples.

The first two Armenians who set foot in Albania came from the Ballxhian and Bodikian families as part of the ottoman army in 1913. After declaration of independence they settled in Albania to start their families by marrying Albanian women and living in Elbasan.
Year 1915 saw the first wave of Armenians coming massively via Greece and Syria to escape persecution from Turks. At that time many Armenians were forced to settle in different countries all over the world. A big part settled in France: over three hundred Armenians. In 1922-1924 during Zogu’s region around 30-50 Armenian families were accommodated in Albania.
At the outset a part of Armenians engaged in handicrafts, others in coffee trade and many of them in intellectual activities,.
At the time of King Zog, Poturlian (Mokini) worked as the personal doctor of Zogu. After the ’90ies Armenians started to establish contacts with other communities abroad, mainly with their Diaspora in Greece and that in France which was bigger in size, also the most influential among the Armenians. In Albania the Armenians created the Cultural Association Armenians in Albania.

In 1993 the Archbishop of Armenian church in France and of Diaspora in the Western Europe Gyut Naggashian made a visit to Albania where he gathered the Armenian community in a meeting held in St. Anoni Church in Tirana.
“Armenians have provided great hospitality for Albanians,” Xovasar says. The relations between this community and Albanian population have been very good, which is reflected not only in the excellent hospitality but also in different marriages, aid and mutual respect.
Armenians have preserved their traditions for many years in a row as well as the language, religion and holidays. Unlike the rest of the world who celebrate Christmas on Dec. 25, Armenians mark this day on January 6 as they belong to a different denomination, new for Albanians, the Gregorian Church which stands between the Catholic and Orthodox religion bearing a strong resemblance to the Orthodox one.
They have preserved the Armenian language. Some of them hold the Armenian nationality as Xovasar does.
A special tradition handed down from generation to generation is the wedding. Before the bride enters the house, a rooster will be sacrificed on her feet and afterwards she has to break with one foot a plate set down on her feet.
Today there are around 800 Armenians living in Albania . Mr. Xovasar considers himself to be “100 percent Armenian due to his Armenian parents but also “100 percent Albanian” because he was born and raised in Albania where he has built everything up in Albania.

According to a study conducted by Gjin Varfi, in the Armenian village of Vlora, there is a church which is presumed to have been built by an Armenian community in Albania.
The St. Koll Church is thought to originate from Armenia because it has been built in the style of Armenian churches which feature the pointed domes.
The Byzantine period when it was built (the 11th-12th century) could have been the time when Armenians started to settle as part of the movements within the territories of Byzantine Empire. This church is the first of its kind in the Albanian territories.

This church bears strong resemblance to the churches built in Kotorr (Montenegro) and Stanimak, Baçkovo (Bulgaria), built in the 11th and 12th centuries. These evidence show that Albania Armenians have come not only in the 20th century but also back in time, almost ten centuries ago.

The agreement signed in November 2014 includes sharing of information and multimedia materials. The agreement was signed in Armenia’s Yerevan by ATA director general Gëzim Podgorica and ARMENPRESS director general, Aram Ananyan who, on the sidelines of the Black Sea Alliance summit, touched on other issues of bilateral and multilateral communication.
Under the agreement, the two parties will establish an institutional communication on exchange of news items, photos and videos concerning areas of mutual interest.