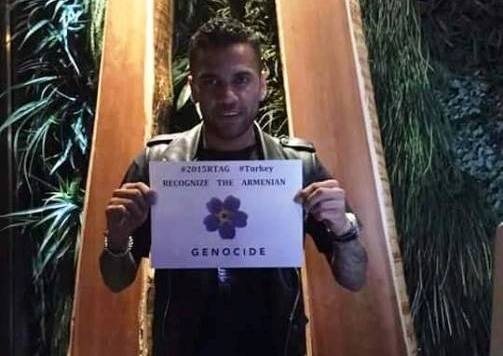 As reports “Armenpress”, the Barcelona-based Armenian businessman Arman Mayilyan has posted a number of photos, where the famous football player Dani Alves, along with other prominent athletes, holds a poster with the following inscription on it: “Turkey, Recognize the Armenian Genocide”.

The fact of the Armenian Genocide by the Ottoman government has been documented, recognized, and affirmed in the form of media and eyewitness reports, laws, resolutions, and statements by many states and international organizations. The complete catalogue of all documents categorizing the 1915 wholesale massacre of the Armenian population in Ottoman Empire as a premeditated and thoroughly executed act of genocide, is extensive. Uruguay was the first country to officially recognize the Armenian Genocide in 1965. The massacres of the Armenian people were officially condemned and recognized as genocide in accordance with the international law by France, Germany, Italy, Belgium, Netherlands, Switzerland, Sweden, Russia, Poland, Lithuania, Greece, Slovakia, Cyprus, Lebanon, Uruguay, Argentina, Venezuela, Chile, Canada, Vatican, Australia and Bolivia.