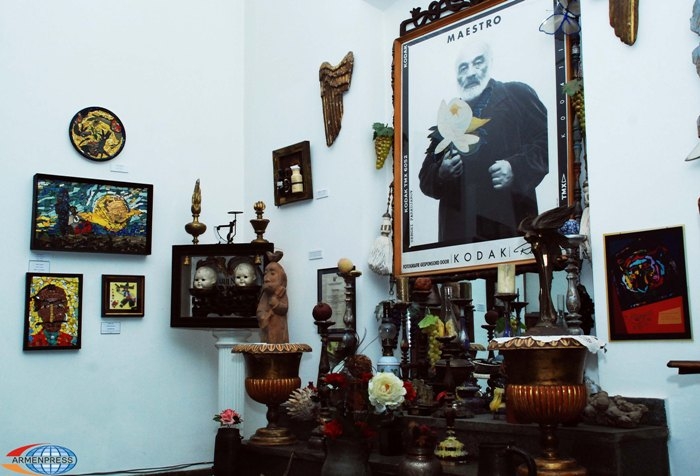 
YEREVAN, JANUARY 9, ARMENPRESS. One of the most radiant representatives of the 20th century cinema Sergei Parajanov would celebrate his 90th birthday anniversary on January 9. This is a good occasion for the outstanding filmmaker’s friends and fans to come together over Parajanov’s art. In a conversation with “Armenpress” the Director of Sergei Parajanov’s Museum Zaven Sargsyan stated that each year they pay a visit the prominent filmmaker’s grave in Komitas Pantheon and this year will not be exception as well. “We’ll organize a reception in the Museum on the occasion of the jubilee as soon as we return from the pantheon,” Zaven Sargsyan underscored.

Among other things the Director of Sergei Parajanov’s Museum Zaven Sargsyan noted that the filmmaker’s 90th anniversary will be marked within the framework of “Golden Apricot” International Film Festival on July 13-20, which will be dedicated to Sergei Parajanov.

Sergei Parajanov was born on January 9, 1924. He was Soviet Armenian film director and artist who made significant contributions to the Ukrainian, Armenian and Georgian cinema. He invented his own cinematic style, which was totally out of step with the guiding principles of socialist realism (the only sanctioned art style in the USSR). This, combined with his controversial lifestyle and behaviour, led Soviet authorities to repeatedly persecute and imprison him, and suppress his films.

Although he started professional film-making in 1954, Parajanov later disowned all the films he made before 1964 as "garbage". After directing Shadows of Forgotten Ancestors (renamed Wild Horses of Fire for most foreign distributions) Parajanov became something of an international celebrity and simultaneously a target of attacks from the system. Nearly all of his film projects and plans from 1965 to 1973 were banned, scrapped or closed by the Soviet film administrations, both local (in Kyiv and Yerevan) and federal (Goskino), almost without discussion, until he was finally arrested in late 1973. He was imprisoned until 1977, despite a plethora of pleas for pardon from various artists. Even after his release (he was arrested for the third and last time in 1982) he was a persona non grata in Soviet cinema. It was not until the mid-1980s, when the political climate started to relax, that he could resume directing. Still, it required the help of influential Georgian actor Dodo Abashidze and other friends to have his last feature films greenlighted. His health seriously weakened by four years in labor camps and nine months in prison in Tbilisi, Parajanov died of lung cancer in 1990, at a time when, after almost 20 years of suppression, his films were being featured at foreign film festivals.

In 1984, the slow thaw within the Soviet Union spurred Parajanov to resume his passion for cinema. With the encouragement of various Georgian intellectuals, he created the multi-award-winning film Legend of Suram Fortress, based on a novella by Daniel Chonkadze, his first return to cinema since Sayat Nova fifteen years earlier. In 1988, Parajanov made another multi-award-winning film, Ashik Kerib, based on a story by Mikhail Lermontov. Parajanov dedicated the film to his close friend Andrei Tarkovsky and "to all the children of the world".

Parajanov then immersed himself in a project that ultimately proved too monumental for his failing health. He died of cancer in Yerevan, Armenia, on July 20, 1990, aged 66, leaving this final work, The Confession, unfinished. It survives in its original negative as Parajanov: The Last Spring, assembled by his close friend Mikhail Vartanov in 1992. Federico Fellini, Tonino Guerra, Francesco Rosi, Alberto Moravia, Giulietta Masina, Marcello Mastroianni and Bernardo Bertolucci were among those who publicly mourned his death. A telegram that came to Russia read "The world of cinema has lost a magician".

The Parajanov-Vartanov Institute was established in Hollywood in 2010 to study, preserve and promote the artistic legacies of Sergei Parajanov and Mikhail Vartanov.