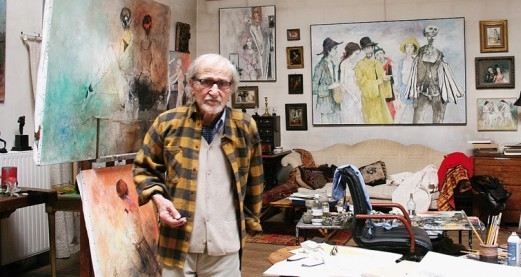 
YEREVAN, AUGUST 28, ARMENPRESS: The world famous 94-year-old French-Armenian painter Jansem (Hovhannes Semerdjian) passed away on August 27 at one of the suburbs of Paris. The members of the Armenpress staff express their condolences to the family and relatives of the great painter on the occasion of his death.

Hovhannes Semerdjian was born in 1920 in Selez near Brusa in the family of silk spinner. His family migrated to Greece from fear of the executions in 1922. In 1931 after his husband’s death the mother of Jansem left for France to cure his son’s broken leg and settled in Paris in the suburb, called Issy-les-Moulineaux.

The first professional schools for Hovhannes became free academies of Montparnasse (1934-1936). Jansem graduated from the ornament making high school in Paris in 1938. His teachers were Brianshon, Legjon, and Udon. Afterwards he was improved in the Sabatie studio for a year.

His picture “The violinist” began to be displayed in the saloon of “Independent artists”. In the first period of his creative life Hovhannes painted pictures that touched merely upon national themes such as “Armenian woman”, “Armenian wedding”, “Funeral” and the like. A part of those works is exhibited in the Armenian art museum of Paris.

Jansem’s creative theme originates from his childhood memories, the great misfortune of his nation. The French science of light characterized Jansem as a miserablist, an artist of unfortunate people.

Hovhannes Semerdjian was elected the president of the young artists’ saloon in 1956. He won the Comparison prize in Mexico in 1958. Jansem had individual exhibitions in Paris, New York, Chicago, London, Tokyo, Rome, Brussels, Lausanne, Beirut and elsewhere. His works were also exhibited in Moscow with French art exhibition. Many canvases by Jansem were placed in the museums of Europe, USA and in individual collections.

For the first time Jansem visited Armenia in 1973.

In 2001 Jansem again visited Armenia by the invitation of the second President of Armenia Robert Kocharyan. He donated his 34 canvases entitled “Genocide” to the Armenian Genocide Museum and Institute.

On March 10, 2010 during a visit to France, the President of the Republic of Armenia Serzh Sargsyan awarded Jansem a medal of honor saying the following, "Our nation is proud of you and values highly your art. While living outside Armenia, you have made our country more recognizable, extending our nation's good name all over the world".