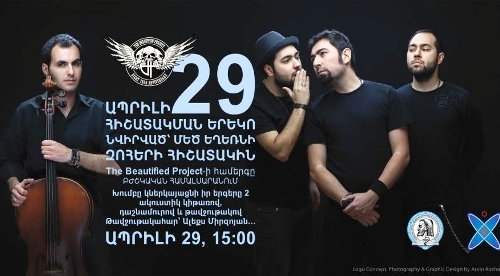 
YEREVAN, APRIL 22, ARMENPRESS: A remembrance evening devoted to the victims fell in the Armenian Genocide will take place on April 29 at the Yerevan State Medical University (YSMU) with the participation of The Beautified Project rock band. As Armenpress was reported by the YSMU, during the concert the songs of the band would be heard by the performance of two acoustic guitars, a cello and a piano.

The entrance of the forthcoming concert is free. The Beautified Project performed a concert devoted to the Armenian Genocide in the largest Armenian Church in London as well.

The Beautified Project is an English-language Melancholic Alternative Rock band formed in London in 2005 by singer/songwriter Andre Simonian. The permanent members of the band are Andre Simonian (vocals/rhythm guitar), Armen Shaverdian (guitars/back vocals) and Arlen Shaverdian (piano/keyboard/effects/back vocals). The Beautified Project is the first internationally recognized English-language band out of Armenia.

In 2006, The Beautified Project, Andre Simonian’s solo project at the time, released its first demo album, ‘Serenades for Insanity’ in London.

In 2008, already a three-piece band recorded and released its first official album, ‘Behind the Happy Mask. ‘Behind the Happy Mask’ is the first English-language album ever released in Armenia. The album gained much success that the band went on to release six official music videos off of this album, two of which went as far as being aired by the mid-east branch of MTV and PMC.

In 2010, the band released its 2nd official album ‘Beyond the Butterfly’ to a critical acclaim. The first single off the album ‘Butterfly,' became the band’s biggest hit to date, gaining them a place on mid-east MTV. The success of the album was followed by several successful concerts in London, Vienna, Georgia and Armenia. During the bands’ UK tour, the international branch of BBC made a documentary about The Beautified Project.

In May 2011, The Beautified Project recorded a duet, ‘Broken Smile’, with the lead singer Mick Moss of the world-known English Melancholic rock band Antimatter.

In December 2011 the band signed a deal with St. Mongoose Entertainment, becoming the first rock band out of Armenia who got signed with an American Record Label.

In early 2012 the band made its first few steps by appearing on several American Radio Stations.