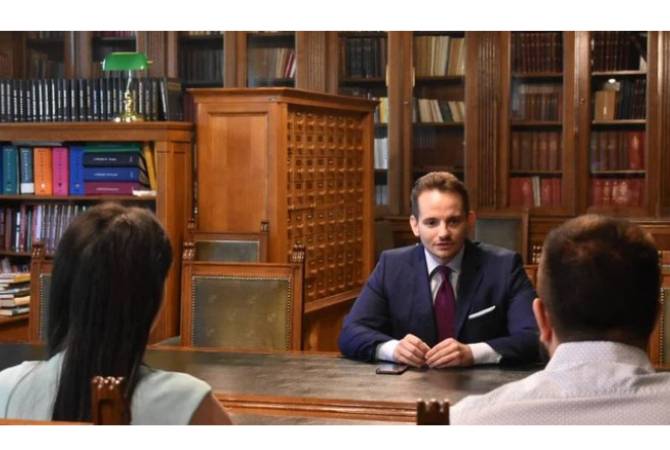 
YEREVAN, JULY 7, ARMENPRESS. Stefan Krkobabic, Vice President of the National Assembly of Serbia, hosted Biljana Obradovic-Shahrimanyan and Darko Obradovic, representatives of the Armenian community of Serbia. ARMENPRESS reports the official website of the National Assembly of Serbia informs that the activities of the Armenian community, opportunities for deepening sports, cultural and general cooperation between Serbia and Armenia were discussed at the meeting.

"Our historical ties date back to the times of Saint Sava, who visited Armenia. Armenian artists and builders contributed to the construction of our medieval churches and monasteries. Our cultural and historical ties are strong," said the Vice President of the National Assembly of Serbia. He emphasized that the bilateral cooperation between Serbia and Armenia has a growing trend. He expressed hope that Armenia will open an embassy in Serbia and expects to cooperate with the Armenian community, which has done a lot since 2019 to promote Armenian culture in Serbia, as well as Serbian culture in Armenia.

"I am sure that with joint efforts we will contribute to the further development of general relations between Serbia and Armenia," he added.

Biljana Obradovic-Shahrimanyan, for her part, said: "The Armenian community of Serbia expresses satisfaction that Serbia preserves multi-ethnic harmony and cultural diversity. Serbia is our country, where we live, create and die. Today's meeting confirms that Serbia listens to its minorities, which are actually its wealth, because diversity unite us."