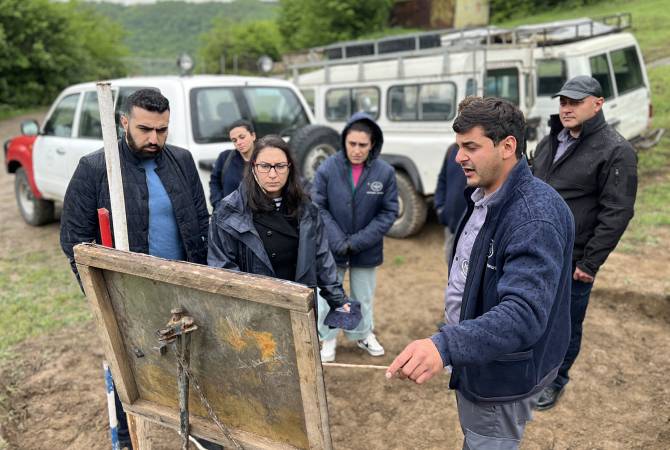 Yerimyan underscored the longstanding calls for to end all U.S. military aid to Azerbaijan and the delivery of an urgently needed $50 million aid package to Artsakh (Nagorno Karabakh).

“Having recently returned from a fact-finding mission in Artsakh, I can bear witness to the devastating humanitarian impact of Azerbaijan’s aggression against Artsakh’s civilian population,” stated Yerimyan. “As many as 100,000 Armenians were displaced. Many schools and hospitals, destroyed during the war, remain in ruins. Countless homes remain uninhabitable. The maternity ward of the state hospital has been rendered completely unusable. In addition to losing at least 70% of their indigenous lands, the Armenians of Artsakh now live upon a landscape littered with landmines and, especially, unexploded ordinance, posing a threat to the daily lives of children and families.”

Yerimyan continued, “Azerbaijan, for its part, continues to illegally hold and abuse Armenian prisoners of war, in contravention of the ceasefire agreement and Baku’s own commitments under international law. During our recent ANCA visit to Artsakh we interviewed a repatriated POW – an 80-year-old female civilian who was captured in her village home, witnessed the beating of her husband, and was tortured herself.”

Yerimyan made the case that Congress should hold the Aliyev regime accountable for the ethnic-cleansing of Artsakh and Baku’s ongoing occupation of sovereign Armenian territory by cutting off all U.S. military aid to its armed forces. She also pressed for a long-term developmental investment in Artsakh, to help its families “rebuild their lives and resettle in safety upon their indigenous Armenian homeland.”

In May, Yerimyan, ANCA IT Director Nerses Semerjian, and Programs Director Alex Manoukian were joined by ANC International’s Gevorg Ghukasyan in a week-long fact-finding mission to Artsakh.  While there, they worked closely with the ANC of Artsakh, which was launched in September 2021, to focus on protecting the rights of Artsakh’s citizens, securing international recognition of the Artsakh Republic, and restoring Artsakh’s territorial integrity.

The ANCA team discussed Artsakh’s geopolitical challenges with Foreign Minister David Babayan and learned new details about the plight of the 100,000 Armenian refugees forced from their ancestral homes during the 2020 war from Artsakh Republic Minister of Social Development and Migration Armine Petrosyan.  Artsakh Human Rights Ombudsman Gegham Stepanyan discussed the effects of Azerbaijan’s ongoing attacks on border villages and the water and gas challenges facing the Artsakh population.  During meetings with Vardan Tadevosyan, the founder and director of the Lady Cox Rehabilitation Center, the ANCA team learned more about the life-changing assistance the center provides for soldiers and civilians injured during the 2020 Artsakh war, while working with children and adults with physical and mental disabilities. The ANCA team also met with representatives of The HALO Trust, whose demining efforts have saved countless lives in Artsakh for over two decades, in part through ANCA-supported U.S. assistance.