Compared to 2018, number of jobs in Armenia has increased by 123.310 – PM Pashinyan | ARMENPRESS Armenian News Agency 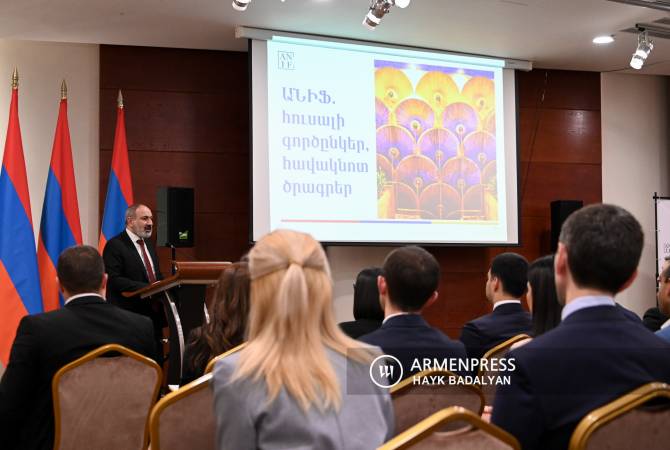 
YEREVAN, MAY 24, ARMENPRES. Prime Minister Nikol Pashinyan attended the event dedicated to the presentation of the report of the 3 years of activities, 2019-2021, of the State Interests Fund of Armenia (ANIF), during which all the programs implemented by ANIF during the reporting period were summarized, ARMENPRESS was informed from the Office f the Prime Minister.

In his speech, Prime Minister Pashinyan reminded that ANIF was established three years ago, during this period the Government has had great expectations from it and continues to have. "But we must emphasize that there are many skeptics, critics, and events that ensure accountability for what has been done during this period are very important.

I want to also say what was the reason behind the decision to establish the foundation. Because both in the system of public administration and in the economy, we see that the most important thing is to have the determination to overcome inertia. Because if we do not show that determination, political will, we will just have to follow like an observer what is happening with our economy, what are the effects, and just collect data. But ANIF was created with the sole purpose of overcoming that inertia, trying to provide a new course for our economy, a new logic, a new mood. I hope we have already approached the line after which we will see results," the Prime Minister said.

Taking the opportunity, Nikol Pashinyan referred to the impact of several previously adopted decisions on the economy. "For example, in 2018 we made a political decision to introduce a flat income tax in the Republic of Armenia. Do you remember there was a lot of criticism then, a lot of pessimism, but I must say that, for example, according to the data for April, we have a new absolute record in the Armenian labor market. In other words, the absolute number of jobs registered in the Republic of Armenia as of April is greater than ever before. Usually, we consider the last such record to be in December 2021, which is traditionally the month with the highest number of jobs, but already in April we surpassed the previous record by more than 5,000 jobs, and compared to 2018, the number of jobs in the Republic of Armenia has increased by 123.310. I am talking not only about registered jobs, but also about paid jobs, because there are jobs from which no income tax is generated," Nikol Pashinyan said.

Referring to the next important result, the Prime Minister said, “Once we were discussing, it was widely accepted, we were warned that we have risks, we may lose budget revenues, but in terms of income tax, in 2021 we collected by 120 billion AMD more than in 2018. This is very important to show why we need to overcome inertia, why we need to go beyond standards. There are examples that have been applied in other countries - we need to be very careful and take a creative approach in terms of localization, because fortunately there are various models of economic development tested in the world. Of course, we need to be careful, but on the other hand, we should introduce our own handwriting in the process.

In spite of everything, it seems that the economic mood in our country is not bad, because according to the data of the first quarter, we have a real GDP growth of 8.6%, and in Armenia, while according to the data of the first 4 months, we have an additional trade turnover of 574 billion AMD against last year. This shows that there is a certain mood. In the near future we are expecting a number of interesting investment programs of the Armenian Government, ie the launch of the new airline founded by ANIF. We hope that the presence of ANIF in the Armenian economy will become more and more visible, of course, with positive and bright indicators."

In general, ANIF invests $ 214 million in various sectors of the Armenian economy through joint projects with partners, of which 91% - by partners, 9% - by ANIF.

During the 2.5 years of activity, ANIF has signed more than a dozen memoranda of cooperation and documents with internationally recognized companies.

Thanks to ANIF, two major investment projects of strategic importance for the country have been launched.

- Construction of a 200 MW solar power plant "Ayg-1" in cooperation with Masdar company in the territory of Talin and Dashtadem communities of Aragatsotn Province.

ANIF's subsidiary “Entrepreneur + State” Investment Fund continues to support local companies through investments. To date, the fund has implemented an investment program of about $ 10 million in 6 companies, as a result of which more than 170 jobs have been and will be created together with "Father and Son Yeremyans", "Amber Capital", "Food Republic", "Apaga Projects" ", “Global Connect" companies.

The purpose of the Fund is to foster the inflow of private capital into the economy, thereby ensuring sustainable long-term capital growth.

In order to promote the development of the investment environment in Armenia, the ARFI (Armenian Financed) program will be launched this year, which aims to spread investment activities on the online platform as well, increasing the scope of potential investments.