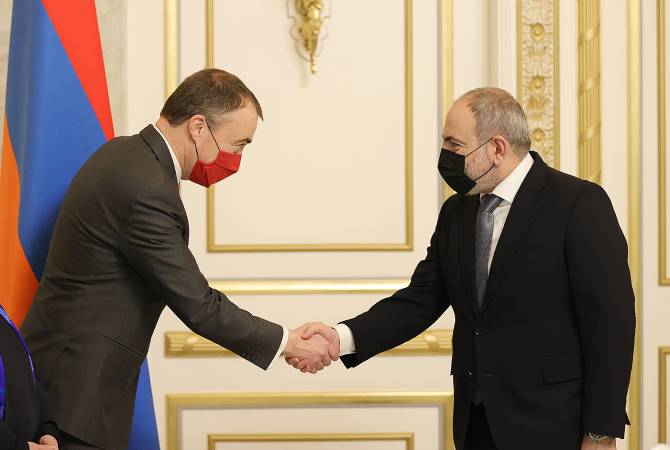 
YEREVAN, FEBRUARY 14, ARMENPRESS. Prime Minister Nikol Pashinyan received the EU Special Representative for the South Caucasus and the crisis in Georgia Toivo Klaar and the Head of the EU Delegation to Armenia Ambassador Andrea Wiktorin.

Pashinyan and the EU officials discussed issues relating to the course of works in direction of implementing the 2,6 billion euro EU investment package envisaged for Armenia. In this context the effective realization of the 80 million euro package in the Syunik province was especially highlighted.

PM Pashinyan highly appreciated President of the European Council Charles Michel’s efforts for mutual-understanding and strengthening of stability in the region.

The situation in the South Caucasus region after the 2020 war and the measures aimed at de-escalating the situation at the Armenian-Azerbaijani border and ensuring stability were addressed. In particular, views were exchanged relating to the implementation of the agreements reached during the meetings mediated by the Russian President in Sochi, the President of the European Council and the French President in Brussels, as well as the February 4 trilateral video-conference.

Ensuring access of the UNESCO mission and international humanitarian organizations into Nagorno Karabakh was highlighted, given the threatening statements made by the Azerbaijani side against Armenian cultural heritage and the steps that have already been made in direction of destroying several Armenian monuments.

The need for a full launch of OSCE Minsk Group Co-Chairmanship-mediated peace process in direction of a lasting settlement of the NK conflict and the intensification of the Co-Chairs’ activities were emphasized.