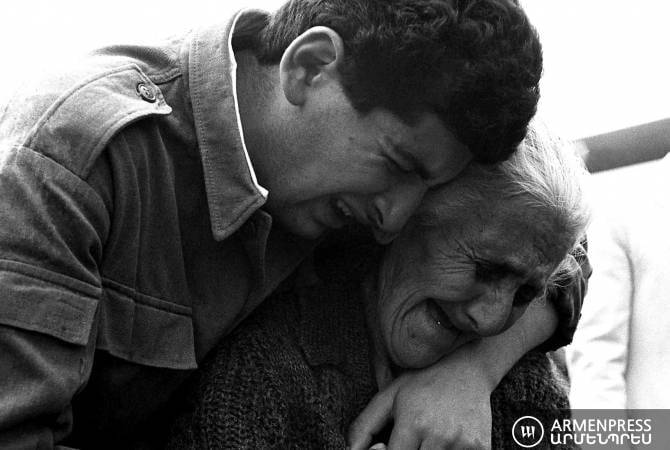 
YEREVAN, JANUARY 19, ARMENPRESS. The Office of the Human Rights Ombudsman of Artsakh has issued a statement on the 32nd anniversary of the anti-Armenian pogroms in Baku.

ARMENPRESS presents the text of the statement:

“32 years ago, on January 13-19, 1990 a systematic and mass massacre of the Armenian population was carried out in Baku with apparent permission and support of the Azerbaijani authorities. Hundreds of Armenians were killed, dispossessed and hundreds of thousands of Armenians tortured during the week-long atrocities.

Armenian population of Baku and other cities were deported under the direct threat of physical existence, and found refuge in Artsakh, Armenia and other countries of the world without receiving international status and support. Over the years, Armenian cultural heritage in those areas was vandalized and desecrated, their historical value and significance were distorted by the Azerbaijani authorities being adapted to their political expediencies.

The realization, encouragement and glorification of the Armenian massacres by the Azerbaijani authorities and unfortunately by the Azerbaijani society is systematic, large-scale and has a clear chronology: in 1905 and 1918 - the massacres in Baku, February, 1988 - Sumgait and in November of the same year in Gandzak-Kirovabad,1990s - again in Baku, Maragha, 2004 - the glorification of Ramil Safarov who axed Gurgen Margaryan, the killings of civiliansand the torture of the Armenian military during April 2026 war, and Azerbaijani-Turkish aggressionof 2020, are undeniable evidence of the systematic policy of Armenian massacres and its consequences.

Due to the poisoning of the society by the authorities for years, intolerance, hatred against and murder of Armenians, vandalism against Armenian cultural heritage and desecration of monuments in Azerbaijan have become not only a state but a national policy. This is a fact against which the urgency of taking measures is also enshrined in the decision of the UN International Court of Justice.

Under the false slogans of peace building in the region, Azerbaijani authorities continue to commit widespread violations of the rights of the Armenians of Artsakh creating an atmosphere of fear, despair, disrupting normal life in Artsakh, isolating the people of Artsakh from the world.

There is ample material documenting the crimes committed by Azerbaijan against the Armenians, it only takes an impartial and courageous eye to see it all and give a proper assessment. Unfortunately, these crimes have not received a clear legal assessment from the international community. This impunity is one of the focal reasons why Azerbaijan allows itself grossly violate the norms of international law, to speak with hatred about an entire nation without any fear it may be held accountable.

Guided by the most fundamental principle of the universality of human rights, pursuing the unconditional observance of this principle and restoration of justice, we will continue to demand the condemnation of the crimes against Armenians and the prevention of new crimes”.