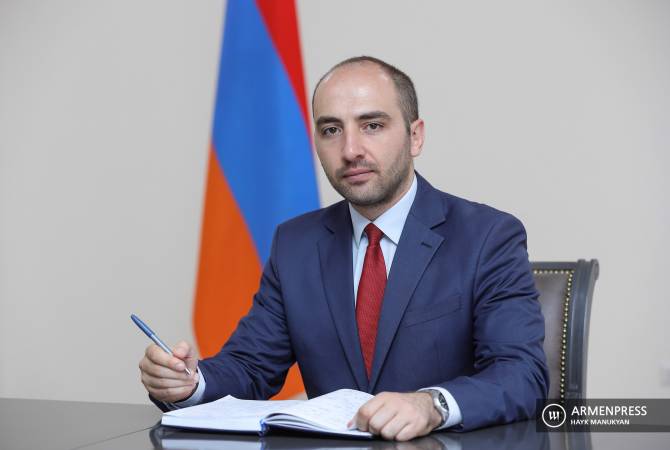 
YEREVAN, JANUARY 13, ARMENPRESS. Armenia expects that diplomatic ties will be established with Turkey as a result of the dialogue process, and the border between the two countries will be opened, Armenian Foreign Ministry spokesperson Vahan Hunanyan said responding to questions from ARMENPRESS ahead of the first meeting between the Armenian and Turkish special envoys planned for January 14.

Hunanyan underscored that the Turkish government seemingly shares the approach of starting the dialogue without preconditions.

ARMENPRESS – What are the main goals that Armenia wants to achieve through the dialogue with Turkey?

Vahan Hunanyan – Armenia’s expectations from this dialogue are essentially the same that were since the 1990s. We expect that as a result of the process diplomatic relations will be established between Armenia and Turkey and the border between the two countries which was unilaterally closed by Turkey itself in the early 90s will be re-opened.

ARMENPRESS – There are opinions claiming that by agreeing to start dialogue with Turkey, Armenia has already accepted Turkey’s preconditions in the context of normalization of relations with Armenia. How would you comment?

Vahan Hunanyan - The Republic of Armenia has always stated its readiness to normalize relations with Turkey without any precondition. In this regard I have to state that Armenia’s stance hasn’t changed, and the same position is reflected in the 2021-2026 Armenian Government Program.

As we’ve mentioned in the past, we’ve regularly underscored the need for preserving the “without preconditions” principle in our contacts with international partners. Our impression is that the Turkish government also shares the approach of starting the dialogue without preconditions.

ARMENPRESS - The first meeting of the special envoys of Armenia and Turkey in the normalization process is scheduled to take place on January 14 in Moscow. What will be the format of the meeting and what expectations does Armenia have from this meeting?

Vahan Hunanyan - The meeting of the special envoys of Armenia and Turkey will be hosted by the Russian side in Moscow. Essentially, this first meeting will have the nature of a [courtesy meeting]. It is difficult to expect tangible results from a single meeting, but this will kick off the process.