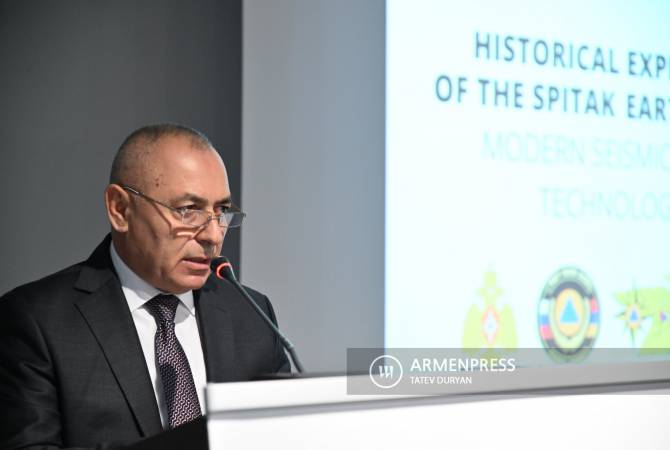 The Armenian Minister of Emergency Situations Andranik Piloyan noted in his remarks that the devastating Spitak earthquake underscored the numerous flaws and problems regarding the resistance of residential complexes and other structures against earthquakes. Piloyan emphasized that seismic resistance of buildings still remains a topical issue in Armenia.

The minister said that new methods of strengthening seismic protection of buildings are being developed and introduced, and simultaneously the authorities are carrying out evacuation trainings with residents in Armenia and in Artsakh.

“We have difficult memories from 33 years ago. Today, we share our experience with the world and we take the global experience. Every year on this day events commemorating the victims of the earthquake take place in Armenia and in the Diaspora,” he said.

The Deputy Minister of Emergency Situations of Russia Nikolay Grechushkin said at the conference that the evaluation of earthquake prevention, monitoring and consequences enabled to amass significant experience since the Spitak earthquake.

“The Spitak earthquake made everyone think and pay attention to such disasters. It became an occasion to create modern technologies for safety not only in Armenia but around the world, which enable to minimize losses and avoid such disasters,” he said.

He said that Armenian and Russian emergency response experts will jointly conduct a seismic assessment of buildings using the Struna mobile complex.