FM Babayan highlights international recognition of Artsakh, de-occupation of territories as a priority 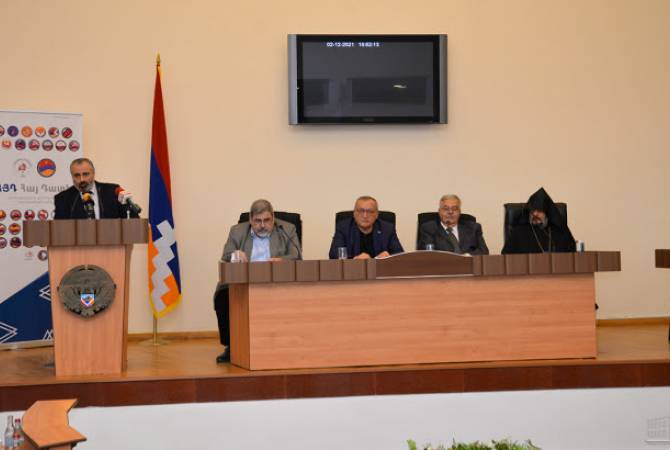 
STEPANAKERT, DECEMBER 4, ARMENPRESS. Minister of Foreign Affairs of the Republic of Artsakh David Babayan participated in the conference of the ARF-Dashnaktsutyun Hay Dat Committees and Offices, which took place in the Grand Hall of the National Assembly of Artsakh, and delivered a speech, the Artsakh MFA reports.

In his speech, the Foreign Minister touched upon the main directions of the foreign policy of the Republic of Artsakh, regional developments, and the Azerbaijani-Karabakh conflict settlement process.

Among the foreign policy priorities David Babayan pointed out the international recognition of the Republic, de-occupation of the territories of the Republic of Artsakh, comprehensive and just settlement of the Azerbaijani-Karabakh conflict, as well as the development and expansion of relations with different countries and their entities.

The Minister stressed that any status within Azerbaijan is unacceptable for the people and authorities of Artsakh, which would mean annihilation of Artsakh and the Armenian statehood.

For the effective solution of those problems, the Foreign Minister noted the importance of the status of Artsakh as a geopolitical actor, the pan-Armenian unity, and perception of Artsakh as a supreme national value in Armenia and in the Diaspora.

David Babayan highly appreciated the works carried out by the Hay Dat Offices and their contribution to the development and strengthening of Artsakh. The Minister expressed gratitude to the ARF Hay Dat for its patriotic activities and expressed hope that the structure would continue its work with the same zeal and dedication and that the Artsakh-centrism would remain among the pillars of its activity.

During the conference, the Foreign Minister also answered the questions of the participants related to the challenges in the foreign policy sphere and the works carried out to overcome them.