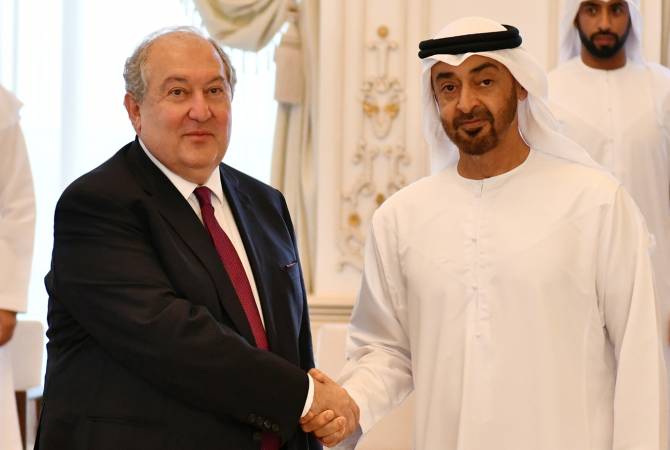 
YEREVAN, DECEMBER 2, ARMENPRESS. President of Armenia Armen Sarkissian sent a congratulatory letter to Sheikh Mohammed bin Zayed Al Nahyan, Crown Prince of Abu Dhabi and Deputy Supreme Commander of the UAE Armed Forces, on the occasion of the 50th anniversary of the founding of the United Arab Emirates, the Presidential Office reports.

“I warmly congratulate you and address you my best wishes on the 50th anniversary of the founding of the United Arab Emirates.

The five decades of independence have been marked by impressive achievements and progress, which turned into a reality thanks to the skilled governance and hard work. Your initiatives and programs, which are based on science, education and innovations, undoubtedly, guide the United Arab Emirates to more prosperous future with consistent steps.

I highly appreciate the dynamically developing relations between Armenia and the United Arab Emirates.

I specifically highlight our meetings and contacts which further deepen the friendship between our peoples and the inter-state cooperation.

I am convinced that we will further expand and strengthen the bilateral cooperation with regular meetings and united efforts for the benefit of the welfare of our nations.

I wish you good health, success, and to the good people of the United Arab Emirates – lasting peace and welfare”, reads the Armenian President’s letter.