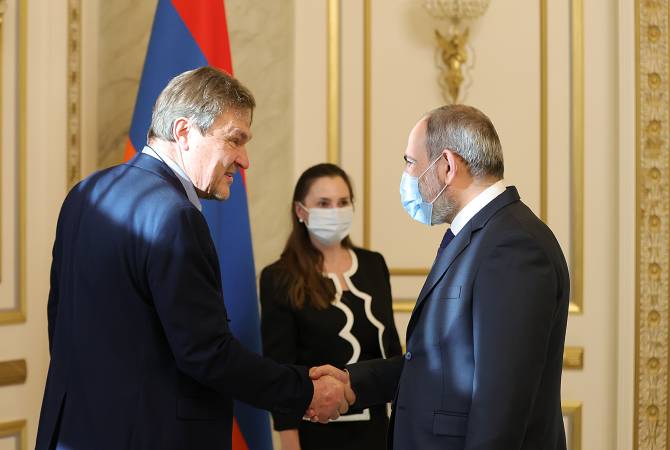 I must state that we have tangible success in the field of democracy; we can finally state that our success in the field of democracy is so much that the international community also sees and records it. I am also glad that the Council of Europe sees and records this. I think that especially the recent events make obvious the irreversibility of democratic processes in the Republic of Armenia. We still have the issue of adjusting the speed, it is very important that we will adopt the right speed in the context of these changes. One thing is clear: the fundamental problem that has existed in Armenia for many years has been solved just as fundamentally. I am talking about the reliability of the election results. In this regard, of course, we appreciate the contribution that the Council of Europe has made in supporting Armenia in the issue of democracy during the 20 years.

But we have problems in the other direction. Unfortunately, stability and peace in our region are greatly jeopardized, and the fact that we still have prisoners in Azerbaijan, in spite of the trilateral declaration of November 9, 2020, is the brightest expression of this. I highly appreciate that this issue was voiced and recorded in the PACE. That's really important. It is also important that the European Court of Human Rights expresses very firm position on a number of issues. This furthermore underscores the importance of our membership in the Council of Europe.

Nevertheless, despite all the challenges and difficulties, the Armenian Government has adopted a policy of opening an era of peaceful development for Armenia and the region. The bad news is that it does not depend only on us, or rather the bad news is that not everyone shares this agenda or, at least, the understanding of the parameters of peace are not the same. But we must continue to work consistently in that direction. Anyway, we also need the support of our international partners in this matter. I want to welcome you once again and I am happy for this opportunity to discuss the progress of our affairs."

PACE Monitoring Committee co-rapporteur on Armenia Boriana Åberg said, “Mr. Prime Minister, I would like to express my and my colleagues’ gratitude for inviting us here. I would like to also congratulate you on your decision to hold early parliamentary elections in the summer of 2021 and on your convincing victory in those elections. It was a victory not only for you, but a victory for democracy in Armenia. As you have already mentioned, Armenia has made many achievements in the field of democracy. During the last 3 days we had the opportunity to meet many people, visit a number of institutions, such as the Anti-Corruption Commission and other bodies. And it is really gratifying to see that your country is a shining star of democracy in the region.”

In his turn, Kimmo Kiljunen said, “Thank you, Mr. Prime Minister. First of all, as the Vice-President of the Parliamentary Assembly of the Council of Europe, on behalf of the PACE, I would like to congratulate you on the propper organization of the elections. We were observers and we recorded that the elections met international standards and commitments. I personally want to congratulate you on your victory in the elections. These elections were much more important for you and your party than the elections following the Velvet Revolution, because now the situation is more consolidated and you can implement your program. Your Government's Action Plan has received a strong mandate from the people, and its credibility is guaranteed by the election results."

The PACE Monitoring Committee co-rapporteurs on Armenia highlighted the efforts of all participating countries for peace and stability in the region, noting that they will continue to voice the need for the immediate release of Armenian prisoners of war and other detainees kept in Azerbaijan.

The parties exchanged views on issues referring to the post-war situation, the Nagorno Karabakh conflict, the accomplishment of democratic institutions in our country, the protection of human rights, and a number of sectoral reforms.

The Prime Minister referred to judicial, anti-corruption, constitutional, institutional, electoral reforms, and stressed the progress in the field of freedom of speech, noting that freedom of press and speech in Armenia has never been at such a high level as after 2018 and now. Nikol Pashinyan stressed that Armenia is committed to the agenda of strengthening democracy and will continue to move forward in that path.

Issues related to the efficiency of the parliamentary system of governance were also raised.