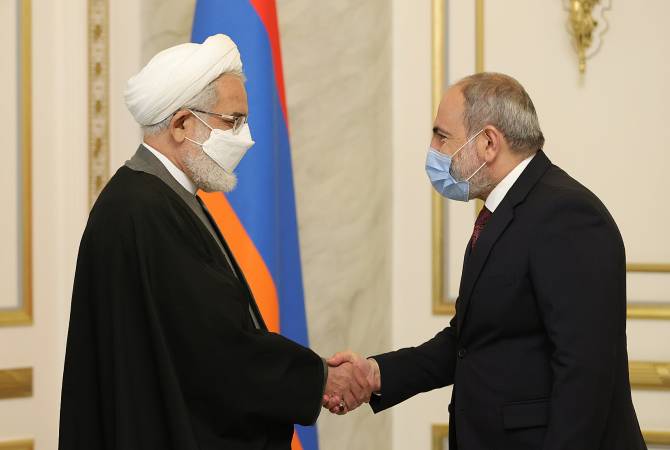 Pashinyan welcomed the Iranian Prosecutor General’s visit to Armenia and stated that the government attaches great importance to the relations and cooperation with Iran, including in the law enforcement field.

“I am happy to record that there is quite an effective cooperation between our offices of prosecutor general. Of course, Armenia is ready to develop and deepen the cooperation in the justice field, and your visit is a good opportunity in this direction. During the meetings with the Iranian President we agreed that all our agencies should establish close cooperation”, the Armenian PM said.

In turn Mohammad Jafar Montazeri said his visit to Armenia is taking place in response to the visit of the Armenian Prosecutor General to Iran.

“Of course, due to coronavirus this visit was delayed a little bit. Before my visit to Armenia, I met with President of Iran Mr. Raisi two-three days ago. He asked to convey his warm greetings to you, praised you and stated that your recent meeting was very good and productive”.

The Prosecutor General said that Iran highlights the development and expansion of the cooperation with Armenia in all areas. He said that the centuries-old friendly relations between the two countries are a good base to resist all the challenges existing in the region and find necessary solutions with the exercise of the existing big potential. “We are interested in developing the relations with Armenia for the benefit of our countries”, Mohammad Jafar Montazeri said.

Mr. Montazeri said that Iran, in its relations with neighbors, is guided by friendly policy, however, adding that they will never allow deployment of terrorists and forces provoking war along the country’s borders.

PM Pashinyan added that he has great impressions from the meetings with the Iranian President and stated that his statement according to which the new governments of Armenia and Iran have started their activity at the same time is viewed as a message to open a new page in the bilateral relations.

11:29, 05.19.2022
3200 views U.S. recognizes role of population of Nagorno-Karabakh in deciding its future–Ambassador Tracy’s interview to ARMENPRESS