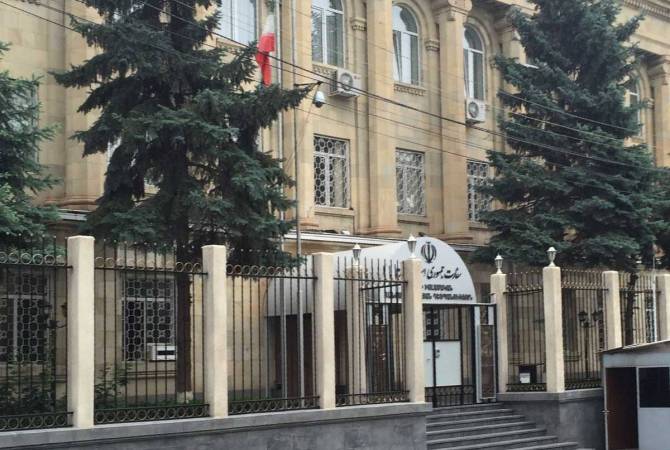 
YEREVAN, SEPTEMBER 25, ARMENPRESS. The need for guaranteeing traffic via the Kapan-Goris road and efforts for regulating transport shipments as a result of agreements on new demarcations in Syunik province have become of double importance for both Iran and Armenia, the Iranian embassy in Armenia said in response to an inquiry of ARMENPRESS, referring to the obstacles facing Iranian cargo truck drivers on the Kapan-Goris road caused by the Azerbaijani authorities in areas under their control, such as checkpoints and charging of duties.

The Iranian embassy added that clarifications made by Armenian government officials give great hopes around the swift development of the alternative bypass through Tatev, and that Iran is hopeful that in the nearest future they will witness the opening of a road with safe infrastructure. At the same time, the Iranian side expects that before the opening of the alternative road, traffic via the current road will resume normally.

ARMENPRESS – According to the official press release, on September 22 during a meeting with the Secretary of Security Council Armen Grigoryan, the Iranian Ambassador to Armenia H.E. Abbas Badakhshan Zohouri addressed the obstacles caused by Azerbaijan in the Kapan-Goris section of the interstate road, expressing concern over the problems around the use of infrastructures linking Iran with Armenia. What information can you convey over the course of actions in direction of resolving these problems and around the discussions over this issue with the Armenian and especially Azerbaijani sides? Does the Azerbaijani side continue to cause obstacles for Iranian motorists on the Kapan-Goris road?

Iranian Embassy – In the recent months, while communicating with relevant authorities of Armenia, the [Iranian] embassy tried to evaluate the unique condition of the Goris-Kapan road, the prospects of its exploitation and various sides related to the transit of goods and passengers from this and other possible roads. Undoubtedly, until the present phase of this road it was the main route of trade continuation and movement of citizens of the two countries. Nevertheless, as a result of the latest agreements on new demarcations in the Syunik province, the need to guarantee traffic and efforts for settling transport shipments have become of double importance for both the Islamic Republic of Iran and Armenia.

We believe that the security of Armenia’s land road, in addition to the positive effect it will have on the current communication, can present the stable picture of the region to the businessmen and investors of the two countries and the region and guide them to plan their economic activity and raise the level of mutual interactions. The security of this two-way road, in addition, can show Armenia’s reliable position for advancing major infrastructure projects in the region.

Undoubtedly, what was being proposed in the recent months as a goal – to unblock regional transportation communications, is again in this format, which is becoming actual.

ARMENPRESS – In your opinion, how can in principle the problem of the road linking Iran with Armenia be solved? Do you have any offered formula in this regard?

Iranian Embassy – During the latest meeting of the Iranian Ambassador and Mr. Armen Grigoryan the unique condition of the Goris-Kapan road and the unusual move implemented in direction of charging only Iranian cargo trucks with duties, and current programs and initiatives were discussed. The clarifications coming from Armenian government officials inspire great hopes around the swift development of the alternative route through Tatev, and we are hopeful that soon we will witness the opening of a road with safe infrastructure.

Certainly, the Islamic Republic of Iran expects that before the opening of the alternative road, the traffic via the current road will continue normally. These concerns have been communicated to Armenian government officials on various occasions. At the same time, this issue, besides proper attention and consultation of the Armenian government with its colleagues, requires also the efforts of other sides. Therefore, parallel to expressing Iran’s expectations to Armenian authorities, separate contacts are underway with other sides, including with Azerbaijani government officials.

ARMENPRESS – Do you see political subtexts in Azerbaijan’s actions given the recent Azerbaijani media reports saying that Iranians are conducting cargo shipments to Artsakh Republic?

Iranian Embassy – In the bilateral dimension, with the purpose of further advancing cooperation projects, an agreement was reached to hold a joint forum of economic cooperation between the two countries, which we are hopeful will be implemented soon. Fortunately, as part of the Dushanbe summit constructive negotiations of the two presidents took place, and there is a comprehensive program of joint cooperation.