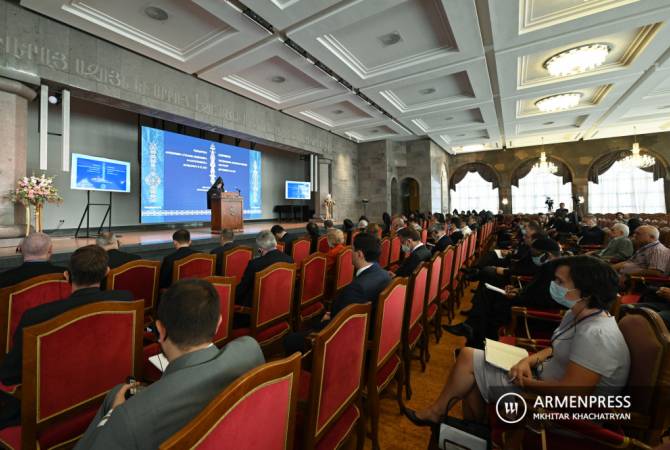 
YEREVAN, SEPTEMBER 9, ARMENPRESS. On September 9, the Mother See of Holy Etchmiadzin hosted a conference entitled "Religious Freedom and Peace", which brought together religious leaders, leading scholars and experts from different countries to discuss the importance of preserving global cultural and historical heritage, as well as to elaborate recommendations for the protection of religious freedom and cultural heritage around the world.

As ARMENPRESS was informed from the press service of the Mother See of Holy Etchmiadzin, Catholicos of All Armenian Karekin II delivered a speech at the conference, speaking about freedom, peace and justice.

‘’The ideas of freedom and peace are the same age as in the history of mankind and continue to be relevant today, especially when the existence of violence, conflicts and wars in different parts of the world are often tried to be justified with false agendas of freedom or peace’’, the Catholicos said in his speech, adding that understandings of the idea of freedom, no matter what foundation they are built on, must be unquestionably called to serve the harmonious and peaceful coexistence of the people.

‘’Peace can bring fruits and remain alive if justice is in place. Forced peace, without justice, gives birth to pain and suffering instead of good, brings hatred and enmity in human life. Despite the universal realization and aspiration to the need of freedom and peace, violence, wars, ethnic hatred, and world-wide crimes based on them have not been overcome in the world to this day. Moreover, such actions continue to be carried out with the application of the latest modern scientific and technical achievements’', Karekin II said, adding that the Armenian people have beared the consequences of the violation of freedom and ethnic hatred during its history. '' Such tragic events took place in the life of our people at the beginning of the 20th century, when one and a half million Armenians fell victim to the Genocide in the Ottoman Empire, the Armenian people suffered the greatest loss, being deprived of their historical homeland. The indifference to the first genocide in the history of mankind and the delay in the application of legal remedies led to other genocides, crimes against humanity, the tragic consequences of which were the Holocaust in the middle of the last century, the genocides of Cambodia, Rwanda and Darfur in the late 20th century. We encountered such tragic events also recently, when a large-scale war was unleashed by Azerbaijan against our people living in Artsakh. During the hostilities, which involved the Turkish Armed Forces and international terrorist groups, phosphorus weapon and other banned weapons were used against civilians and civilian settlements. Thousands of people died and became disabled as a result of these tragic events, settlements were destroyed, tens of thousands of families became refugees, many of them, both military and civilian, were taken captive even after the hostilities and are kept in cruel conditions in Azerbaijan to this day, with gross violations of international humanitarian law. We would like to once again express our appreciation to all the international humanitarian, ecclesiastical and inter-church institutions and organizations for their work on the release of Armenian prisoners of war and the preservation of religious and cultural values’', the Catholicos of All Armenians said, adding that the bombing and destruction of religious sites during and after the war speak about the Azerbaijani policy of eradicating the Armenian trace from Artsakh, like it happened in 2003, when over 6 thousand cross-stones of the Armenian cemetery in Jugha were destructed, the territory of which was transformed into a shooting range.

At the end of the speech, Catholicos of All Armenians wished the participants of the conference productive work.