Armenians around the globe celebrate 30th anniversary of independence of Artsakh 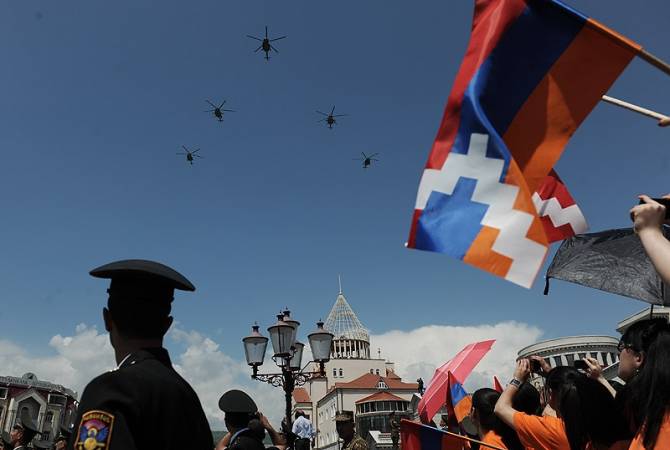 
YEREVAN, SEPTEMBER 2, ARMENPRESS. Today, September 2, 2021, marks the 30th anniversary of the declaration of independence of Artsakh, formerly known as the Nagorno Karabakh Republic.

On this day in 1991, a joint sitting of lawmakers from the Nagorno Karabakh provincial council and the Shahumyan regional council proclaimed the Nagorno Karabakh Republic (NKR) within the borders of the former NKAO and Shahumyan region. The move was in line with the then-active legislation, particularly the April 3, 1990 law which entitled national autonomies to determine their status on their own.

On December 10, 1991, a few days before the official collapse of the Soviet Union, Nagorno Karabakh held a referendum, where the overwhelming majority, 99,89%, of the population voted in favor of complete independence from Azerbaijan. After this, Azerbaijan totally blockaded NKR and launched military aggressions.

The Artsakh Liberation War began when for the first time in September of 1991 Azerbaijan bombarded Stepanakert with Alazan rockets from Shushi. In 1994, at the request of Azerbaijan a trilateral (Azerbaijan, NKR, Armenia) ceasefire agreement was signed on May 12.

15 years after independence, in 2006, the people of Artsakh adopted the country’s Constitution through a referendum, again on September 2.

On September 27, 2020, Azerbaijan, with the support of Turkey and engagement of mercenary terrorists, launched a large-scale war against Artsakh. The war lasted until November 9 when a trilateral statement at the mediation of Russia was signed to stop the military operations.