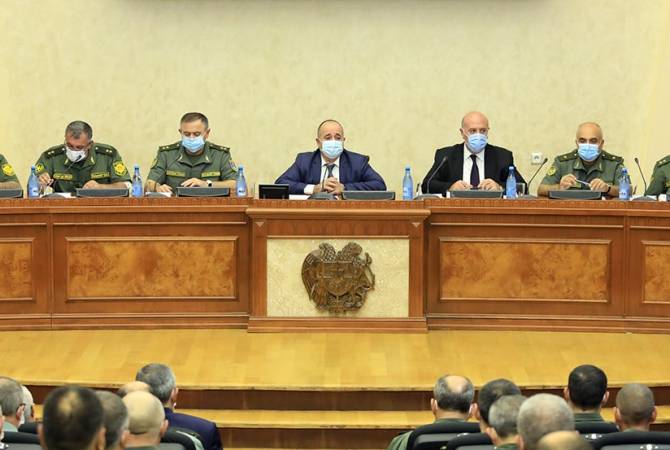 
YEREVAN, AUGUST 5, ARMENPRESS. A sitting of the Board under the Minister of Defense took place today at the administrative building of the Defense Ministry, during which the participants referred to the situation on the Armenian-Azerbaijani border, the provocations carried out by the adversary and the measures to counter them.

As ARMENPRESS was informed from the press service of the MoD Armenia, the Defense Minister strictly instructed to exclude any attempt of the adversary to advance or improve the positions.

During the sitting of the board issues related with the service in the winter season were addressed. Minister Arshak Karapetyan tasked the heads of the relevant departments to solve all the existing problems in the shortest period and ensure adequate conditions for winter service.

The Defense Minister also tasked the participants of the sitting to make all possible efforts for a speedy and effective implementation of reforms in the Armed Forces.

11:29, 05.19.2022
2959 views U.S. recognizes role of population of Nagorno-Karabakh in deciding its future–Ambassador Tracy’s interview to ARMENPRESS