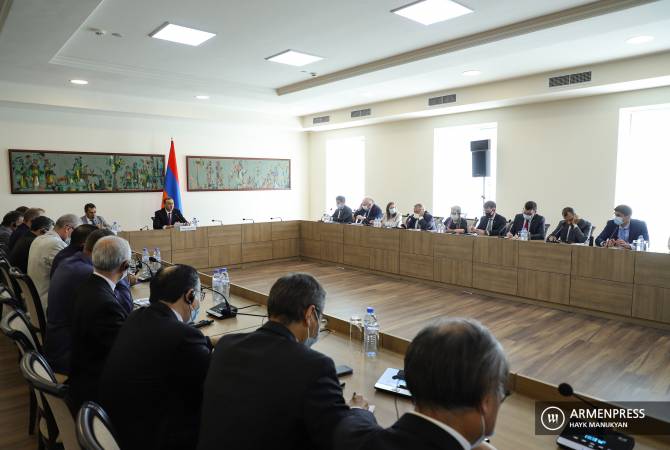 
YEREVAN, JULY 20, ARMENPRESS. Acting Minister of Foreign Affairs of the Republic of Armenia Armen Grigoryan received the heads of the diplomatic missions accredited in Armenia on July 20.

As ARMENPRESS was ifnormed from the press servic eof the MFA Armenia, The key topic of the meeting was the situation created as a result of Azerbaijan's encroachments on the sovereign territory of Armenia, in particular, the incursion of the Azerbaijani armed forces into Syunik and Gegharkunik regions, as well as the creation of a new hot spot in the Ararat region, in the direction of Yeraskh community.

During the meeting, Armen Grigoryan noted that in parallel with those actions, official Baku is making false territorial-historical claims against Armenia, which clearly indicate Azerbaijan's occupational aspirations towards the territory of the Republic of Armenia. It was stressed that the the inadequate response of the international community to use of force against the people of Artsakh, mass atrocities, including ethnic cleansing, encouraged Azerbaijan to make the use of force as a permanent tool of policy, which threatens regional security and peace.

In this context, Armen Grigoryan emphasized, ''The Republic of Armenia and the Armenian people will not tolerate such violations of their rights. Today, the Armed Forces of Armenia are fully fulfilling their responsibilities to guarantee the territorial integrity of Armenia. Armenia will put into operation its entire military-political toolkit, cooperating also on bilateral and multilateral formats''.

Armen Grigoryan stressed that Armenia expects a clear response from international partners to such violations of international law by Azerbaijan.

It was especially emphasized that without the resumption of the Karabakh peace process, and reaching a final settlement to the conflict, the region will constantly face new attempts to disrupt security.

''Armenia ready to engage in Karabakh peace process based on approaches proposed by OSCE Minsk Group Co-Chairs which reaffirm the Co-Chairs' principles, including the right to self-determination'', Armen Grigoryan said.