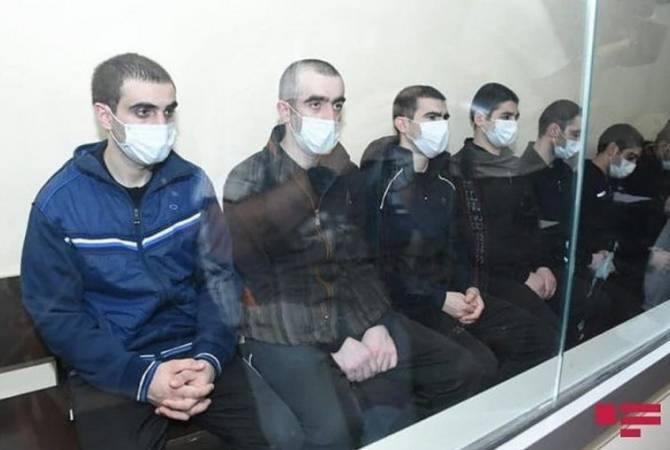 
YEREVAN, JULY 2, ARMENPRESS. An Azerbaijani court has completed the trial of 14 Armenian prisoners of war on trumped-up charges. ARMENPRESS reports, citing Azerbaijani  media, during the trial of 14 Armenian prisoners of war in the Baku Court on Grave Crimes , the prosecutor demanded that 2 of the POWs (Gegham Serobyan and Hrach Avagyan) should be sentenced to 5 years in prison and the others to 2 years on the charges of ‘’illegally crossing the Azerbaijani border’’.

The court took a decision to sentence Gegham Serobyan and Hrach Avagyan to 4 years imprisonment, and 6 months for the other 12 POWs.

Initially, they were charged for ‘’terrorism and sabotage’’, ‘’carrying arms’’, ‘’illegal border crossing’’ and other crimes.

Azerbaijan continues to ignore the agreements of November 9, 2020 agreement, particularly, the exchange of POWs and other detainees according to ‘’all for all’’ principle. Armenia has returned all Azerbaijani POWs, as well as 2 criminals who had murdered a minor in 2014.

Caretaker Prime Minister of Armenia Nikol Pashinyan had said that by June 17 there were 60 Armenian POWs in Azerbaijan and suspects of 110 more POWs.

11:29, 05.19.2022
2259 views U.S. recognizes role of population of Nagorno-Karabakh in deciding its future–Ambassador Tracy’s interview to ARMENPRESS