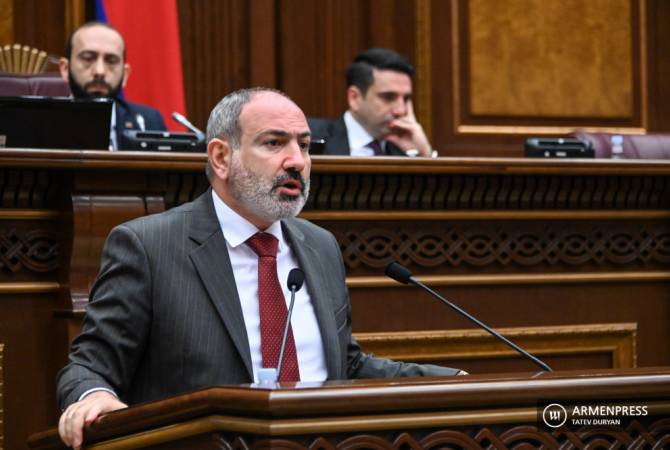 
YEREVAN, MAY 26, ARMENPRESS. Armenia doesn’t rule out applying to the UN Security Council over the Azeri military incursion in case the CSTO levers or the levers on the Armenia-Russia unified troops treaty turn out to be insufficient to solve this issue, caretaker Prime Minister Nikol Pashinyan said in parliament during question time when asked to comment by LHK opposition leader Edmon Marukyan.

Pashinyan again said that the goal of the Azeri authorities’ actions in the Lake Sev area was to instigate a military clash, and as announced previously by the Azeri leader Ilham Aliyev “to create a corridor by the use of force”. This assessment is the reason why Armenia appealed to the CSTO.

“As of this moment we are not satisfied with the pace of the CSTO actions, but we will continue to consistently work in this direction and carry out work with our partners over further explanation of the situation, because I find the preliminary plan which Azerbaijan had as being neutralized at this moment. Our partners must be clearly notified about that plan and they must express a clear stance,” Pashinyan said.

Pashinyan drew attention to the fact that CSTO countries and the organization itself have not expressed a clear stance that Azerbaijan must pull back its troops. However, he said that this stance is expressed on a working level, but not publicly. Pashinyan said that this issue must be clarified. “For example, it is said that demarcation and delimitation isn’t done in that part. The borders of Russia and Azerbaijan themselves isn’t entirely demarcated and delimitated. What does this mean?” he said.

Speaking about potentially applying to the UN Security Council, Pashinyan said: “This issue has been a subject of discussion from the very first days, and it remains a subject of discussion. There are simply nuances, that upon making such decision one must have a certain field of view of predictability. To carry out preparations beforehand. And we’ve never ruled out and don’t rule out that we will take that path if it turns out that the CSTO levers or the levers of the treaty on the Armenian-Russian unified contingent are insufficient for solving this situation and problem.”