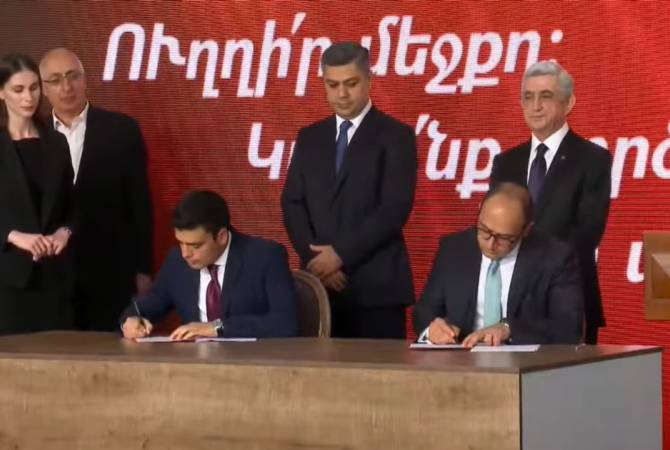 
YEREVAN, MAY 15, ARMENPRESS. The Republican Party of Armenia and the Homeland Party are joining forces and will run for parliament in the upcoming snap election under the “I Have the Honor” alliance.

The ceremony where the parties signed the alliance was attended by Republican Party chairman, former president of Armenia Serzh Sargsyan and Homeland Party chairman Artur Vanetsyan, the former director of the National Security Service.

The memorandum of understanding signed between the parties heavily lambasts the incumbent government and states that the “Armenian statehood is at stake”.

Sargsyan says the signing of the memorandum will launch the “work of honor” of this phase, which is “the removal through the opposition’s victory in the upcoming elections of the government that failed state administration. To restore Armenia’s full sovereignty, return to our people the right to live peacefully, safely and in dignity in their homeland and faith in tomorrow. The current geopolitical developments, the rise in tension virtually everywhere, the directs threats facing us, the inadequate conduct of the Armenian authorities don’t give any basis for optimism to hope that in such conditions we'll be able to thwart the imminent new danger with skillful, accurately calculated steps and put our country back on safe tracks having prospects for development.” Sargsyan said the electoral campaigns must not only not divide people, but should unite all patriotic people and organizations.

In turn, Homeland Party leader Artur Vanetsyan said that his party and the Republican Party decided to join forces because they have similar visions for the country’s development and strengthening.

The former Minister of Justice Davit Harutyunyan, who is now a representative of the alliance’s campaign headquarters, told reporters that they have chosen “Stand Tall, Let’s Get to Work to Live” slogan.

The I Have The Honor alliance is using a pentagram as its logo. “Few know that the five-pointed star is one of the earliest symbols of Christianity. For us it symbolizes service to country, historic memory, the victories and heroic deeds of our ancestors and man’s dreams,” Harutyunyan said.