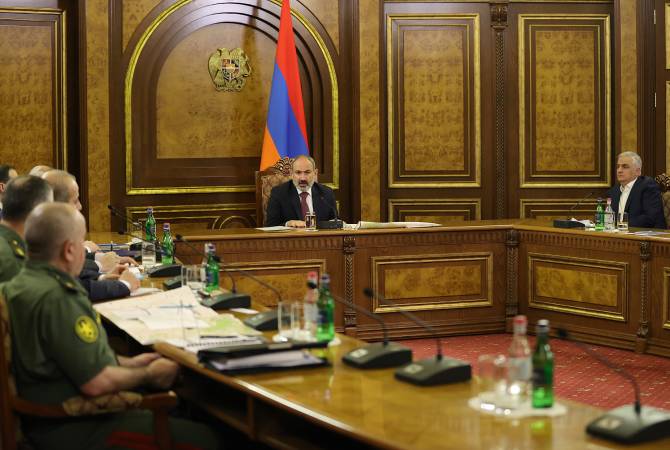 
YEREVAN, MAY 13, ARMENPRESS. Caretaker Prime Minister of Armenia Nikol Pashinyan chaired an emergency meeting of the Security Council during which the current situation in the territory of Sev Lake in Syunik province and the further actions were discussed, the PM’s Office told Armenpress.

“Today’s session of the Security Council is dedicated to the developments taking place in the territory of Sev Lake and adjacent territory in Syunik province. Today in the morning the Azerbaijani armed forces crossed Armenia’s state border in that territory and advanced up to 3,5 kilometers, they, in fact, are trying to surround the Lake.

Of course, these actions are intolerable for the Republic of Armenia, because it is an encroachment against the sovereign territory of Armenia and why and how such an action became possible is a different subject for discussion, but it should be noted that this is, in fact, a subversive penetration.

It should be noted that the Armenian Armed Forces have responded to these developments from early morning, have carried out necessary tactical moves and other actions. The actions of the Azerbaijani armed forces have not been accompanied by use of firearms or any other weapons, and they are trying to justify their actions by some maps, which are deem and imaginary because at our disposal we have a map approved between Soviet Armenia and Soviet Azerbaijan, also approved by the Central Government, which clearly shows where the border between Armenia and Azerbaijan passes.

Nevertheless, the current situation is unacceptable, Armenia cannot tolerate this situation, but also given this situation our key task is to solve the problem through negotiations, diplomatic means. But this is one of the options.

I want us to clearly record that we cannot tolerate this situation in any way, and today during the session of the Security Council we must discuss the situation of this moment and our future steps, the possible scenarios and the existing internal connections between these scenarios. I consider it necessary to note that, unfortunately, the situation also becomes a cause of domestic political speculations. I want to reiterate that no attempt must be made to use the external security situation for domestic political purposes, because this is a matter of national security and in such situation we must focus on the problem and its solution.

I want to note once again that the reports about shootings, fighting, wounded, victims have no connection with the reality, but, on the other hand, it should be noted that the situation is at least near-critical, if not critical”, he said, calling for keeping calm. “We need to be consistent in terms of protecting our state and national interests, and today we also need to make decisions on our actions and future tools”, Pashinyan added.