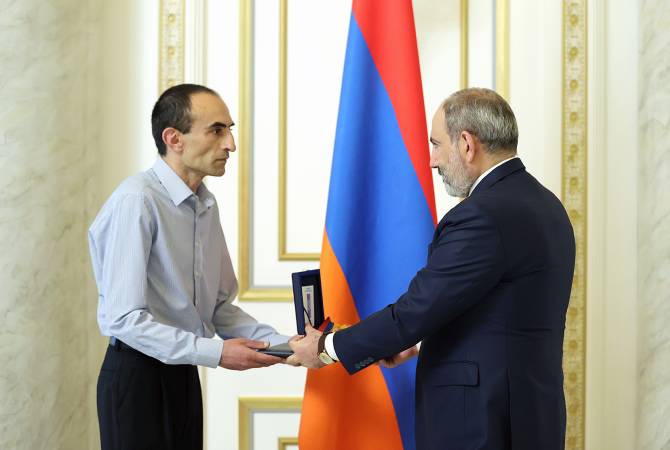 
YEREVAN, MAY 8, ARMENPRESS. Caretaker Prime Minister of Armenia Nikol Pashinyan handed over the Order of Motherland, which was posthumously awarded to Major-General Arkady Ter-Tadevosyan, to his son, Hayk Ter-Tadevosyan, the PM’s Office told Armenpress.

“Dear Mr. Ter-Tadevosyan, I attach great importance to today’s occasion and regret that I am handing over this highest title not to the Komandos personally, but to you, and I also regret that we are handing over this award posthumously. Nevertheless, I think that this a tribute, a very important tribute not only to Arkady Ter-Tadevosyan, but also to all our compatriots who dedicated themselves for the Artsakh liberation fight and the defense of the Homeland in general.

Moreover, I want to state once again that as we have been convinced the awards and tributes to the Armed Forces and commanders relate to the entire people, because the Army, the society are one unity and individuals make their heroic deeds relying first of all on the nation, the state, the people, their history, spirit, goals and dreams”, Pashinyan said.

On behalf of his family Hayk Ter-Tadevosyan thanked the caretaker PM for the award. “This highest title, which was bestowed to my father, will become one of the symbols of our future victories. It’s a great symbol for our youth”, he said.

On May 8 President of Armenia Armen Sarkissian, based on the proposal of caretaker Prime Minister, signed a decree on posthumously awarding Major-General, Hero of Artsakh Arkady Ter-Tadevosyan with the Order of Motherland for his exclusive services provided to the creation, development of the Armenian Armed Forces, the protection and security of the Homeland.