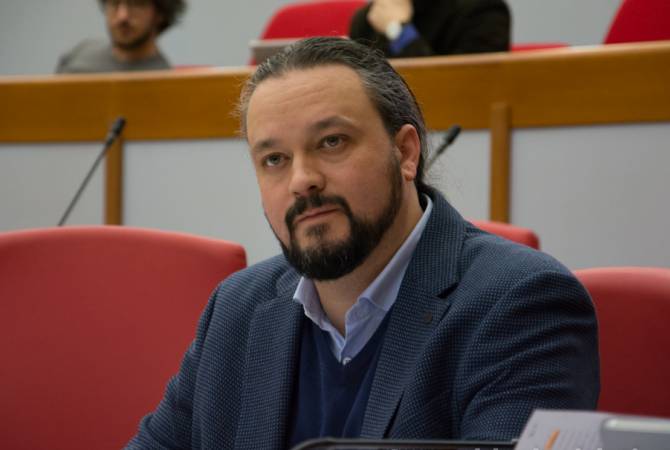 
YEREVAN, MAY 1, ARMENPRESS. The Mayor of the Italian city of Ferrara slammed the Turkish Ambassador for his “intolerant interference” in trying to achieve the cancellation of an event commemorating the victims of the Armenian Genocide.

“Ferrara is no Turkey”, - the infuriated Mayor Alan Fabbri said in a statement in response to Ambassador of Turkey to Italy Murad Salim Esenli’s letter.

The Turkish ambassador requested Fabbri to cancel the “Armenian Genocide Between Remembrance, Denial and Silence” event with participation of Antonia Arslan at a local theater in Ferrara. In his letter, the ambassador unsurprisingly pushed forward the Turkish denialism and called the event a “unilateral event” which is “based entirely on claims of Armenians.”

Mayor Fabbri didn’t hide his anger over this letter.

Noting that not only are there numerous proof of the Armenian Genocide, with the latest recognition coming from US President Joe Biden, but that the Turkish envoy is factually “suggesting in our own house to censor an event the only purpose of which is to commemorate the memory of 1,5 million innocent victims and struggle against denial which is taking place for too long.”

“We can’t allow the memory to be insulted, we can’t allow a country like Turkey, which doesn’t stand out with democratic indicators, to try and tangle democratic, peaceful and cultural initiatives which are carried out in a theater which is considered to be a temple of freedom. If with his intolerant interference the Turkish ambassador thinks he can dictate his rules in our own house then I have to say he is deeply mistaken. Ferrara is a free city, which is against any dictatorship and denialism, and it will be that way forever,” the Mayor said, adding that he will start the process of bestowing the title of Honorary Citizen of Ferrara to Italian-Armenian writer Antonia Arslan and Turkish historian Taner Akcam, who is known for his books on the Armenian Genocide.

“My respects and admiration to both of them,” the Mayor of Ferrara said.