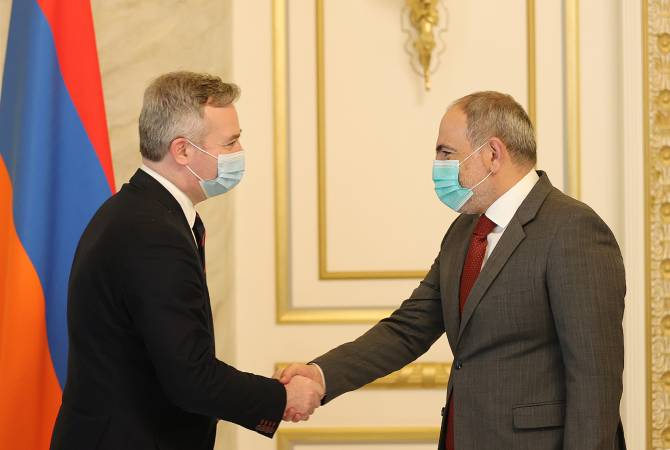 As ARMENPRESS was informed from the Office of the Prime Minister, Nikol Pashinyan noted that this is the 3rd visit of the French Secretary of State for Foreign Affairs to Armenia in the last five months and Armenia highly appreciates President Macron's resolve and persistent steps to stand with the Armenian people at the difficult period. PM Pashinyan emphasized that visit of the French delegation to Armenia on the occasion of the 106th anniversary of the Armenian Genocide is the evidence of the firm friendly relations between Armenia and France, which is based on historical, cultural and political ties and values. ''France had and now has a key role in the process of international recognition of the Armenian Genocide. January this year marked the 20th anniversary of the adoption of the law on the recognition of the Armenian Genocide by France.  A very important milestone was the commemoration of April 24 as the Armenian Genocide Remembrance Day in the French state calendar at an official level, initiated by President Emanuel Macron. The Armenian people are grateful to friendly France for solidarity'', the PM said.

Thanking for the warm words, Jean-Baptiste Lemoyne said that it's an honor for him to stand with Armenia and the Armenian people tomorrow, on April 24 as the special representative of the French President and participate in the commemoration events. The Secretary of State informed that commemoration events will be held in France as well.

The Armenian PM and the French Secretary of State exchanged views on the situation resulted by the war unleashed by Azerbaijan against Artsakh, the efforts aimed at the NK conflict settlement and unblocking regional communications.

PM Pashinyan mentioned preservation of the regional stability, the return of the Armenian POWs kept in Azerbaijan and the resumption of the negotiation process in the sidelines of the OSCE Minsk Group Co-chairs' format as priorities. According to Nikol Pashinyan, Azerbaijan continues its overt aggressive anti-Armenian rhetoric and makes claims towards Armenia's internationally recognized territories. The PM said that the opening of the so-called ''trophy park'' in Baku is condemnable and emphasized that this policy of hatred of Armenians is the greatest ground for applying ''remedial cessation'' principle for Artsakh.

At the request of the French Secretary of State Pm Pashinyan also referred to the upcoming early parliamentary elections in Armenia and the constitutional procedures. Pashinyan emphasized that preserving the democratic quality of the elections is the priority issue, adding that during the post-war crisis period Armenia was able to preserve the democratic nature of the developments.

The interlocutors also discussed bilateral economic issues and the implementation process of the previous agreements.

PM Pashinyan asked Jean-Baptiste Lemoyne to convey to President Macron the invitation to pay a visit to Armenia at a time convenient for him.