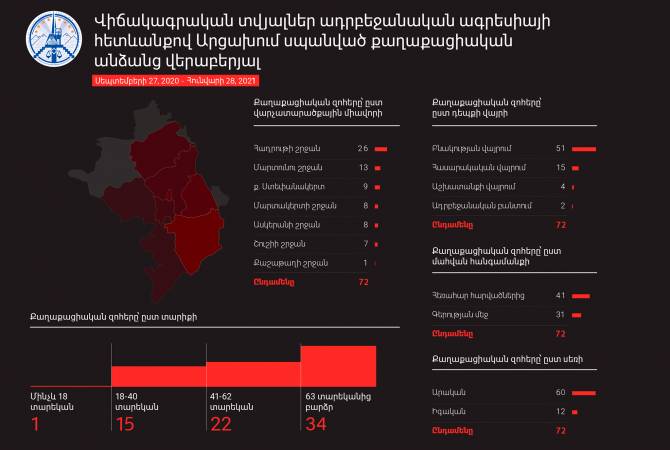 
YEREVAN, JANUARY 29, ARMENPRESS. The Human Rights Ombudsman's staff of the Republic of Artsakh has updated the interim report on the cases of killing of civilians by the Azerbaijani armed forces including also the cases found after December 22, 2020, as a result of search operations, the Ombudsman’s Office told Armenpress.

The Report summarizes the cases of civilian casualties, caused as a result of the military aggression unleashed by Azerbaijan and Turkey against the Artsakh Republic since September 27, 2020, as well as killings of civilians who were imprisoned in the areas fallen under the control of the Azerbaijani armed forces. The cases are introduced with relevant brief information.

From September 27, 2020, to January 28, 2021, the killings of 72 civilians by the Azerbaijani armed forces have been recorded: 41 - from targeted strikes, 31 – in captivity. A number of cases of torture and mutilation of corpses, inevitably targeted civilian deaths were recorded. The Human Rights Ombudsman also recorded the cases of 163 civilian injuries, most of which resulted from strikes that resulted in the deaths of others.

The Report presents only the cases on irrefutable grounds, at the same time the Office of the Human Rights Ombudsman still receives information on the alleged cases of civilian deaths, that require investigation, the results of which will be included in further updates of the Report.

At the time of updating the Report, the Ombudsman's staff still has information on missing civilians some of whom most probably are in captivity, and others are allegedly killed by the Azerbaijani armed forces. This is proved by the regular cases of finding the bodies of civilians in the communities of Artsakh under the control of Azerbaijan.

Bodies of some of the victims have been found a long time later of the death, hence, it requires an in-depth professional examination to detail the circumstances of the death in specific cases and to reveal traces of the crimes committed. However, in some cases, preliminary conclusions of the forensic examination were also presented.

The updated version of the report is available at the following link: https://artsakhombuds.am/en/document/785