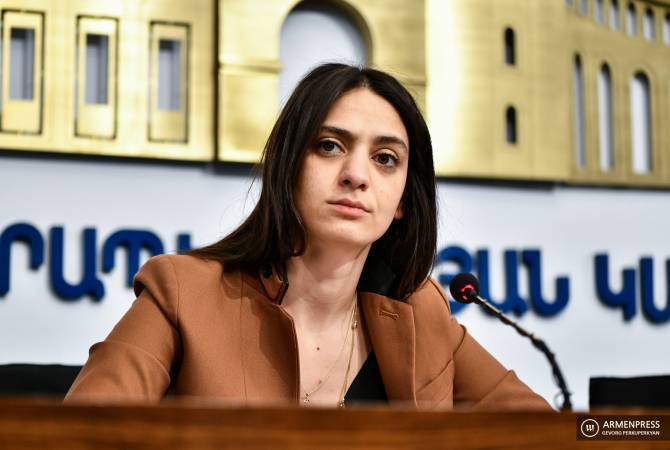 
YEREVAN, JANUARY 7, ARMENPRESS. Spokesperson of the Armenian prime minister Mane Gevorgyan has commented on the statement made by Azerbaijani President Ilham Aliyev over the Nakhijevan corridor in response to ARMENPRESS inquiry.

- Azerbaijani President Ilham Aliyev has talked about the “Nakhijevan corridor”, stating that it will open soon citing the November 10 joint statement. Are there any concrete agreements on opening such a corridor?

- Armenian Prime Minister Nikol Pashinyan has repeatedly drawn the attention to the fact that there is no talk about a corridor connecting Azerbaijan with Nakhijevan in the November 10 statement. Point 9 of the statement is about unblocking the transportation and economic infrastructure of the region and in this context about establishing a transport connection between the eastern part of Azerbaijan and the Nakhichevan Autonomous Republic.

Armenia, of course, is interested in the possibility of transporting Armenian cargo through the territory of Azerbaijan to Russia and Iran and the opposite direction. We are interested in the possibility of the transfer of the Armenian cargo through road and rail transportation to Russia, and to Iran especially through railway transportation. In this context Armenia, naturally, is ready to ensure communication between the Eastern part of Azerbaijan and the Nakhichevan Autonomous Republic.

However, the complete discussion of all these issues would be difficult without the complete fulfillment of point 8 of the November 10 joint statement which envisages exchange of captives, hostages, other detained persons and the bodies of the dead. The Armenian side also attaches importance to expanding the scale of ongoing search-rescue operations in the battle zones. The recent statements made by Azerbaijan on this topic are puzzling and question Baku’s commitment to implement the agreements of the November 10 statement. There are still Armenian captives in Baku, there are numerous evidence on ill treatment shown against the Armenian POWs. There is evidence on executions of the captives, and all these evidence must be investigated in detail, including in the international platforms.

At the same time, the anti-Armenian propaganda of the past decade still continues in Azerbaijan. In order to establish stability and peace in the region, it is necessary to put an end to the provocative actions and statements.