‘We were ordered to slaughter every Armenian in the village’, captured Syrian mercenary says | ARMENPRESS Armenian News Agency

‘We were ordered to slaughter every Armenian in the village’, captured Syrian mercenary says 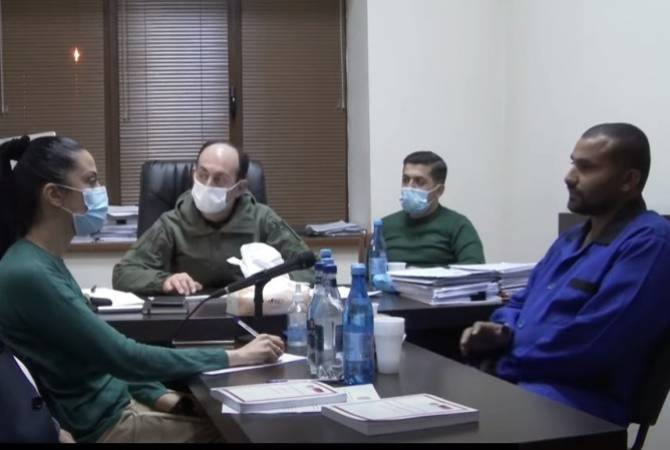 
YEREVAN, NOVEMBER 4, ARMENPRESS. A captured Syrian mercenary who was fighting for the Azerbaijani military against Artsakh has testified how he, along with hundreds others, were recruited and sent through Turkey.

Yusuf Alaabet al-Hajji, a resident of the village of Ziyadiya in the Jisr al-Shughur region of Idlib province of Syria, told Armenian investigators that he was promised a 2000-dollar monthly payment to fight against Armenians.

He is currently remanded into custody facing international terrorism charges, among others.

“15 days ago, in the evening, my friend Ibrahim, whom we call Abu Ahmad and whom I’ve known for a long time, from our neighboring village of Sahan came to my house. Abu Ahmad offered me to go to Azerbaijan for money, I asked him the purpose and he told me that military exercises are held there. I was promised a monthly 2000 dollar payment for taking part in military exercises. My family, my wife and my father, didn’t want me to go, while my brothers were unaware about this. Abu Ahmad said there are many other guys there, from the neighboring Sararif and Sahamn villages, who are in Azerbaijan for already a month,” Yusuf Alaabet al-Hajji said.

He said he was ordered not to take anything with him, including ID.

The mercenary says he was then transported from the village of Ziyadiya to the Bab al Salam checkpoint, which is located in Syrian territory controlled by Abu Hamsha.

Nearly 500 people were gathered there, all of whom Syrian Arabs, he said.

“At 8 o’clock in the morning Abu Hamsha’s brother Seif arrived. When he arrived he said that they are not forcing us, that we are going for a monthly 2000-dollar payment, and whoever doesn’t want to go can return, but he said that if we decide to go to Azerbaijan and then express desire to return from there, he will shoot us in the legs and not allow us to return. Abu Hamsha’s brother then started choosing who will go,” the mercenary said, adding that the recruiter was selecting fighters aged between 20-40. Another detained Syrian mercenary had also mentioned in his testimony the name Abu Hamsha, whom he had identified as the commander of the Suleyman Shah brigade.

Along with 500 other mercenaries, Yusuf Alaabet al-Hajji was taken to 10 large buses. Seif, who was accompanying them, told him that another group of 500 mercenaries had already departed for Azerbaijan earlier.

“We crossed the Syria-Turkey border through this checkpoint. Ethnic Turkish soldiers and people with civilian clothing were guarding the border checkpoint, they didn’t ask us anything, they didn’t check for documents, they only counted,” he said.

2,5 hours later they reached a civilian airport, where the 500 mercenaries were rushed onto two civilian planes flying under the Turkish flag. He said no one asked them anything at the airport. The mercenary says he saw Turkish soldiers there. After reaching a second civilian airport, they were taken on board other aircraft, this time flying under the Azeri flag, and again this happened without any security checks. The plane then landed in Azerbaijan.

“We could differentiate the Turkish soldiers from the flags on their uniforms. On the first day they gave us chains with numbers on them and took photos of us with these chains on our necks. On the second day they gave us uniforms and weapons in the military base. They gave us Russian-made assault rifles, PK machine guns and RPGs, sniper rifles and ammo. The high-ranking Turkish and Azerbaijani servicemen had body armor, but they didn’t give us any. They told us to get ready for deployment the next day. Let me mention that we had arrived to Azerbaijan on October 18, 2020,” the mercenary said during the questioning.

They were trained at the military base by the Azeri and Turkish troops.

Abu Hamsha told them not to spare anyone in the fighting.

“He told us we should slaughter, kill all Armenians, and meanwhile the Turkish and Azerbaijani servicemen were also coming and ordering us to kill and slaughter each and every Armenian. Abu Hamsha, as well as the Turkish and Azerbaijani servicemen, were telling us that each of us would receive an extra 100 dollars for beheading an Armenian. They also armed us with long knives. Those of us who were afraid were given some special drugs by the Azeri military, and they stopped feeling fear after taking them. I have personally witnessed how the Azerbaijani armed forces servicemen were giving the drugs to our Syrian guys, the drugs were round tablets, I haven’t tried it myself, but many of our guys did,” the Syrian mercenary said.

On the 7th day, they were taken on pickup trucks led by Abu Hamsha and Sheikh Ibrahim. Then, they walked around 7 kilometers. There, they were ordered to stand in formation at 6 meters distance from each other, remain silent and communicate only with gestures.

“We were escorted by Sheikh Ibrahim and two Azerbaijani servicemen. Sheikh Ibrahim told us that we must capture the Armenian village ahead of us, and we must slaughter all civilians and soldiers there. When we approached the Armenian village, we came under fire, and also mortar fire, in this period 15 of us were killed, the operation was a failure and we had to escape into the mountains. When we fled, I wasn’t wounded yet, we were lost, we went by a path until we found the Azerbaijanis who had accompanied us, they took us through some path, but during this the Armenians began shooting at us. I got wounded, I was wounded for 5 days, no one asked me anything, no one was interested in me. After three days, I began moving towards the Armenian positions, the Armenians gestured me from distance telling me I am safe, when I approached them they took me to their position, treated my wounds, gave me food and water. They took me to safety, they didn’t harm me, they helped and treated me well, may God bless them,” the mercenary said.

Yusuf Alaabet al-Hajji, who days earlier was fighting against Armenians, is now expressing his gratitude to the Armenians for saving his life. He called on his Syrian compatriots not to get deceived and not to go to Azerbaijan to fight Armenians.

“I want to thank Armenians, they helped me, they treated me, they saved my life, we were wrong to have come here, they – the Armenians, are much better that we thought, they treated us, treated us well, may God bless them. I, Yusuf Alaabet al-Hajji, am stating that anyone who is planning to go to Azerbaijan should not take that step, because Armenians are very good people, they saved me from death, they helped me. I am urging you all, if they try to deceive you and attempt to lure you with money against this country and Armenians, don’t go, even if you are poor, it is better to stay poor then to go to Azerbaijan and fight for money. The Azerbaijanis call the Armenians infidels, but they themselves are the infidels, we are infidels for coming here and fighting against these good people, I stayed wounded for five days in Azerbaijan and no one helped me, but the Armenians did, they helped me and treated my wounds,” he said.