“Israel should think – is it not fighting de facto alongside mercenaries against NK?” – Armenia PM | ARMENPRESS Armenian News Agency

“Israel should think – is it not fighting de facto alongside mercenaries against NK?” – Armenia PM 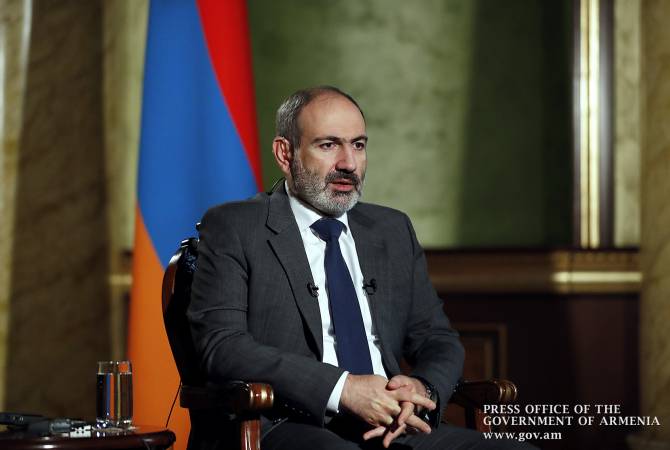 An article about the interview was published on the periodical’s website, which is presented below.

“Israel has lined up with Turkey, terrorists and Syrian mercenaries in backing Azerbaijan in the current conflict with Armenia, and will eventually suffer the consequence of that alliance,” Armenian Prime Minister Nikol Pashinyan told The Jerusalem Post in an exclusive interview on Monday.

Speaking from Yerevan via Zoom, Pashinyan blasted Jerusalem for arming Azerbaijan, which he said is intent on “carrying out genocide against Armenians in Nagorno-Karabakh.”

Azerbaijan and Armenia are in the sixth week of fighting over the disputed region, with estimates of the fatalities on both sides ranging from 1,500 to 5,000.

While Israel has not commented formally on the fighting and the Foreign Ministry is trying to keep Israel out of the conflict, Pashinyan said that Israel is now very actively engaged in the conflict, “because Israeli UAVs are actively used in the war against Nagorno-Karabakh.”

Armenia recalled its ambassador to Israel for consultations in early October – just two weeks after it opened an embassy in Tel Aviv – to protest arms sales to its enemy.

“I think that Israel should think about the following,” the Prime Minister said. “Mercenaries, Islamic terrorists and Israel are now on the same side basically, so Israel should think, is this really a convenient position for it to be?”

Israel should also ponder, he made clear, whether it really wants to be on the same side in the conflict as Turkey, which he claims has moved thousands of Syrian mercenaries into Azerbaijan to fight against Nagorno-Karabakh.

President Reuven Rivlin, soon after Armenia recalled its ambassador, called his Armenian counterpart and offered humanitarian aid. Asked whether his country would be interested in Israeli humanitarian aid, Pashinyan replied bitterly: “Humanitarian aid by a country that is selling weapons to mercenaries, which they are using to strike a civilian peaceful population? I propose that Israel send that aid to the mercenaries and to the terrorists as the logical continuation of its activities.”

Israel has emerged over the last decade as Azerbaijan’s largest arms supplier, followed by Russia and Belarus. Israel views Azerbaijan, because of its strategic location on Iran’s border and the fact that it provides Israel with a large percentage of its oil needs, as one of its most important strategic allies.

Israel’s ties with Armenia, which has strong relations with neighboring Iran, as well as with Russia, have warmed up in recent years, and before the recall of the ambassador, could be characterized as “cordial.”

The Armenian prime minister said that while in the past there was only indirect evidence that Turkey was mobilizing Syrian mercenaries to fight in Azerbaijan, now there is concrete evidence since two mercenaries were recently captured by Nagorno-Karabakh forces.

“One of them has testified comprehensively, and said that he was living in a Turkish-controlled Syrian refugee camp. He described how he was recruited, described where they became engaged, and how they crossed the border into Turkey at an official check point, but without anyone asking them any questions or checking them.” Pashinyan said the mercenaries were being promised $2,000 a month.

The Prime Minister said that what was so dangerous about this situation, and why the international community should take note and action against it, is because it represents a new Turkish modus operandi – what he called a “mechanism” – in its aim to “reinstate the Ottoman empire, as strange as that may sound.”

This “mechanism” – recruiting mercenaries from among the Syrian population under Turkish control to advance Ankara’s foreign policy goals – has already been used in Libya, is now evident in Nagorno-Karabakh, “and who knows where it will be tried next,” he said.

“This is a totally new mechanism that has been put into place, and this mechanism may be manifested in different places and in different ways” as long as the international community does not respond.

“I am very glad that many countries in the Middle East, including many Arab countries, are making the proper assessment and calling this by its name, understanding what a threat this poses to international peace and stability,” he said.

Pashinyan said that certain “shifts are taking place in the international security system, and that those shifts also contain elements of hybrid warfare. Mercenaries are engaging in that warfare. And that hybrid warfare can be manifested in different ways – it can be manifested in ways which we see in Nagorno-Karabakh, or in ways in which we are seeing in Vienna, or in Nice, in France, or in Canada,” all recent sites of terror, or attempted terror acts, by Islamists.

“The world needs to look at this new activity by Turkey and draw the necessary conclusions, because it will use this new way of implementing its foreign policy elsewhere as well,” he predicted.

“Israel should ask itself the question – is it not fighting de facto alongside mercenaries against Nagorno-Karabakh? Is this a convenient position for it? If it is, God be with it. But I think that there will be specific consequences, and you will have to face those consequences.”

Pashinyan said that it was only a matter of time before Turkey’s “imperialistic ambition” will be aimed toward Israel.

Asked if he was warning that at some point Turkey would mobilize Syrian mercenaries to march on Jerusalem, the prime minister said that he was not warning about anything specific, but rather about the creation of a “political environment and political atmosphere, and the gaps which have emerged in the international security system. And if there are gaps, corridors and loopholes, somebody will try to pass through them. And this won’t necessarily be in one area, or in two areas, there will be traffic in all possible directions.”